British Blues – Articles and Essays – Diary of a Bluesman – Chapter 8

I headed northeast by road from Maryport in Cumbria on a sparkling day. I was in no hurry, so pulled over more than once for frustrated drivers who probably had a living to earn and needed to pass. I mused on the prospect of a month in Edinburgh, meeting old friends, making new ones and enjoying the utterly insane schedule that working on the fringe entails. 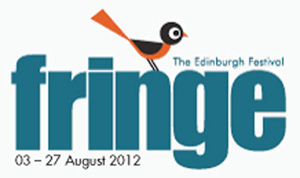 Sameena had found a great flat just off Grassmarket in the shadow of the castle for us to stay in for the duration. I spent a couple of days helping Alex Petty, who is the head of Laughing Horse Comedy and the promoter of the venue for Sameena’s show this year. Alex is one of a number of people who organize and promote the Free Fringe, which has grown in recent years. It provides many comics and performers with their first step on the ladder of their performing careers. Part of the reason it is economically viable for performers, is that many of the tasks paid for by larger promoters are provided by the performers themselves. There is a small army of artists/musicians who help put up signage at venues, build stages and put up posters. All of which helps to keep the costs down for the performer. 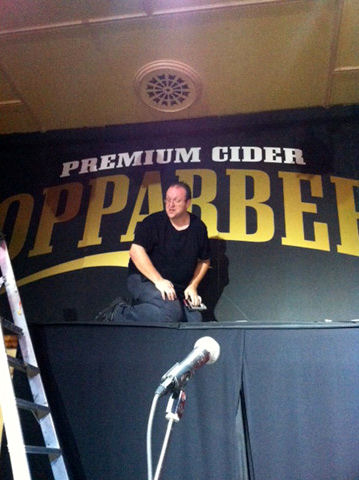 Busking, one of the ways I planned to make ends meet, proved less straight- forward. The first time I set up in one of the busier parts of the festival, I was moved on by the police. I tried unsuccessfully to complain to the council arguing that the fireworks that are launched every night of the Tattoo, constitute a much larger disturbance and nuisance to the local populace, exploding as they do, and doing a fair impression of the artillery bombardment of Iraqi emplacements at the start of ‘Desert Storm’, than a lone bluesman. I think the council prefers fireworks to the blues- ho hum!

I moved to the Royal Mile and set up, only to find that I needed a license from Richard Branson, sorry Virgin Financial Services, who were sponsoring the section on the High Street I was on. I found the ‘Street Performers’ office, paid my tenner and picked up my official street pass. The following morning at 10 o’clock I went down to ‘The Draw’, where all the street performers/buskers meet. We put our passes in a hat and took turns to draw out a pass, the owner of which then chose a pitch. Democratic and fair I thought.

Unfortunately I discovered that there are only two pitches where I could use my busking (amplification) rig, and after only one session gave it up as a waste of time.

The two spots were in two incredibly noisy locations, with loads of passing trade, which was not interesting in supporting (financially) a jobbing bluesman.

I was undeterred, and following a tip from another muso contacted a woman who was running the Fair Trade Marquee set up by the side of Princess Street. She was very keen to have some live music playing outside her event- job done, blues played, monies collected, CD’s sold. An added bonus was there were some great organic fast- food stalls, fuel for a busy performer. 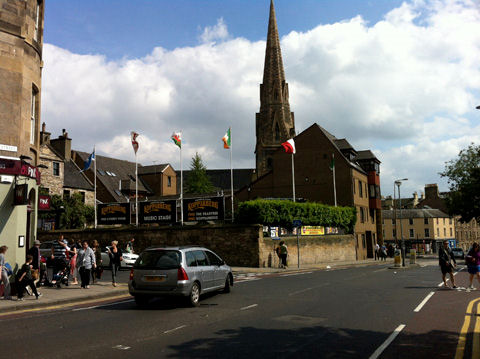 I had been approached, prior to the run by Alex Petty, saying that one of the bigger music pubs – The Pear Tree, was looking for musicians to play in the beer garden. There was no fee but a potentially large captive audience. Busking, or playing for a hat collection, ‘The Bucket’ as it is known, is basically the philosophy of the Free Fringe. You can watch a myriad of performances from theatre to comedy, music to burlesque, all free to get in, you leave a donation if you want to, or can afford it- again truly democratic. It makes for a varied and exciting festival. 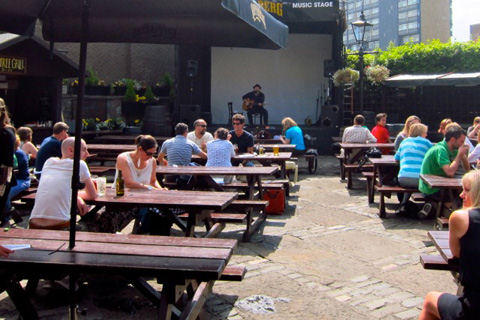 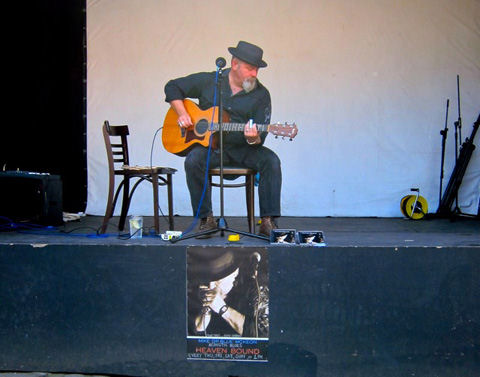 Dr Blue on the stage at the Pear Tree

As the festival progressed I became increasingly busy. In addition to busking, leafleting and playing at the Pear Tree, I was also MC at a family friendly variety show in the morning, in addition to guesting at a similar show in the afternoons.

One of my favourite jobs at the festival is flyering. With more than 2,000 shows, all wanting an audience it is very competitive. Bigger shows employ people to flyer, solo shows like ours requires some work. The link below is from John Flemings Blog written during the festival. It describes my own flyering style and Sameenas show:

There were a couple of jams that I attended and at one, I bumped into Richard Blues. Richard is London based bluesman who is a regular and very popular performer on the Royal Mile. Richard invited me to come and guest at a gig he was doing down in Leith, literally by the docks. The authentic ‘Blues location’ was away from the main festivals and promised to be a good night. Sameena and I jumped into a cab with our comedian friend and major blues – fan, Craig Shaynak.

Richard had already started and was fronting a band of local muso’s who set the room alight. Both Sameena and I got up and played to a very warm and enthusiastic crowd. It was a nice break from our busy schedule. 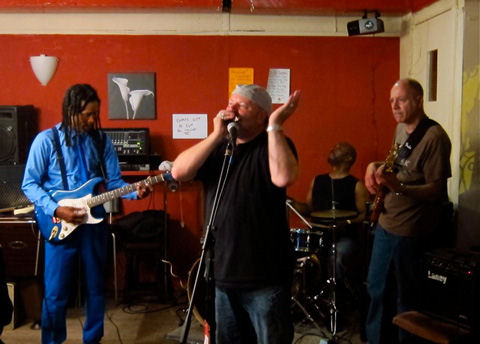 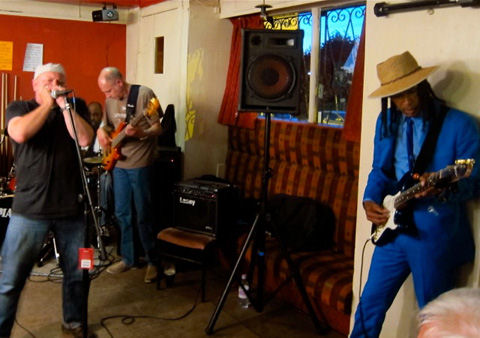 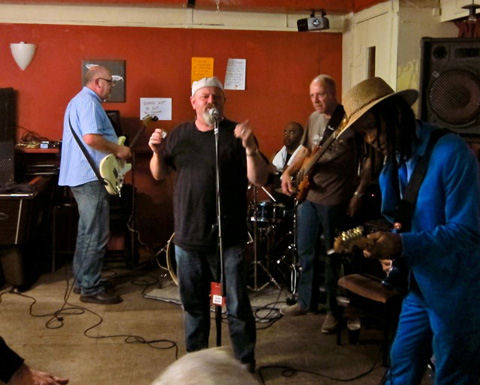 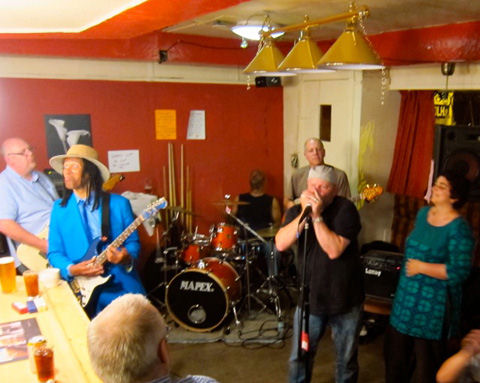 Richard is a very interesting, and as I have now found out, very experienced blues man. He has played with many great performers both here and in America. Richard played with Eroll Linton, who he met busking on the Tube in London. In America he played with Henry Grey who he spent some time with, at his home in Baton Rouge Louisiana. On Henry’s advice Richard went to Chicago to hang out and play in the clubs and at the festivals. During his stay he played with Eddie Campbell the harmonica player. Richard played at Buddy Guys Legends club and played with the likes of Jimmy Johnson. Richard went over for 3 months at a time, over a five-year period on a series of tourist visas. Richard described how he had hung out with the ‘old guys’, from whom he ‘learnt how to play quiet’, and that’s when the ‘Blues started to come together for me’ he said. This struck a chord with me. Many of the Blues bands that you see in the UK would loosely fall into the category of ‘Electric Chicago Blues Bands’, often guitar led and often loud. Now I like to rock out to some shit kicking electric blues, like many of us, but Richard’s comment made sense. If you watch many of the better bands, they really shine when they take it down low. Watch someone like- say Tim Aves. He will wave the band down, taking it quiet. He will step right to the edge of the stage or even off it, walking towards the audience, almost whispering the lyrics and gently soloing or ‘filling’ on his guitar. All of a sudden the performance becomes intimate, almost poignant. It’s like watching the true greats of the blues guitar, its not the notes they play, but the notes they don’t play that makes them great. It’s the silences in the end, that work best for me. 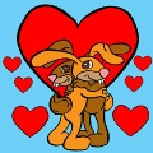 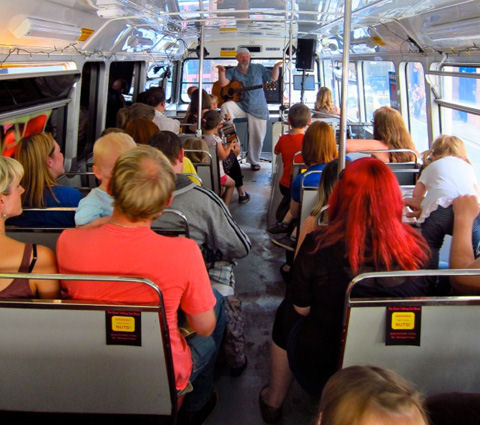 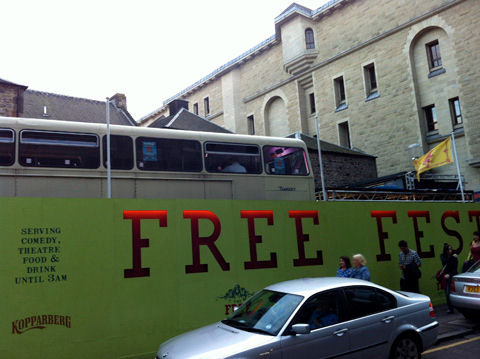 A typical day for me in Edinburgh would start with breakfast at 10am. A walk from the flat with my guitar and a strolly suitcase (with the amp and other gear in it) to the Three Sisters (renamed the Free Sisters) for the 11am Family Friendly Variety Show – Huggers. I would run/compare the show before heading over to the Pear Tree for an hour. From the Pear Tree I would either head back to the Free Sisters to play at the afternoon Huggers Show or walk across town to play outside the Fair Trade Tent for an hour. From there its back to the flat to dump the gear and pick up my fliers for Sameena’s show. A hour and a half flyering on the Royal Mile before walking down to Captain Taylors Coffee House to help see Sameena’s audience into the performance of Tea With Terrorists.

I would usually collapse on one of the sofas outside the venue and have a cup of coffee or a snooze. At the end of the show I would see people out, take the bucket collection and then help Sameena and Derek Ryan (the comedian who followed Sameena) to set up. There is only 15 minutes between shows. This means it’s a rush to clear away glasses and cups, tidy up and get out, before Derek’s crowd start to come in.

It’s now about 8 o’clock, and we are not done. Well I could be, but I usually headed off with Sameena to one of the 3 or maybe 4 guest spots she will do before she hits the sack at around 3am. Most nights I will have gone home to bed by about 2am as I have to be up early (well early for performers) the next morning.

Fortunately we had learnt out lessons from the previous years’ Edinburgh Festival. We had hardly any time to watch other shows then, as our runs (I also had done a show last year) were for the whole festival. This year Sameena finished her run a week early and this meant we had time to go and see some shows, including Derek Ryans ‘Time Lord’ and Craig Shaynaks ‘I am Google’. 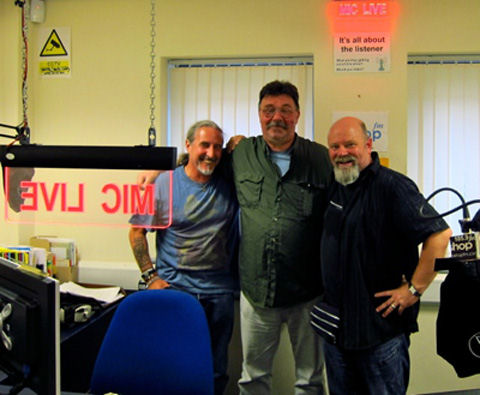 Mike , Gary Grainger and Alan Walton at the studios of Bishop FM

On the way back to London I popped into record a live session at Bishop FM (just outside Newcastle) with Gary Grainger. Gary turned out to be the fourth British Blues Award winner I had met in less that 6 weeks. Gary and I hit it off immediately. There is some utube footage of us in the studio. We enjoyed playing together so much that we are planning to play a few gigs at some point next year:

This was a typical blues encounter. Gary and I clicked immediately; linked as we are by our love for this music we play and spin our lives around.

Sameena and I got back late in London on the 1 st September, after a 5 hour slog down the A1. I had been away for nearly 6 weeks (Sameena for 4) and we were ready for a rest. I am excited to be home as I am planning to finish writing the follow -up to Heaven Bound, which I want to record early next year.