British Blues – Articles and Essays – Diary of a Bluesman – Chapter 12 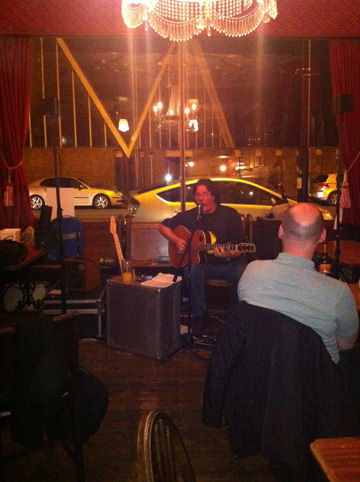 Late autumn leaves are hanging onto the trees, Aretha sings a ‘little prayer’, as I sweep onto the A1 heading north from Leeds. Blue skies and sunshine lifts my spirit; side winds on the exposed section near Rippon, remind me to pay attention. Bill Withers sings, “I know I know I know” as I cruise towards Durham.

I had spent the previous two days traveling ‘up country’ with Sameena, stopping off in Felixstowe, Norwich and Leeds to see family. I had said goodbye to her in Leeds, as she had to head back south on the train for a gig in London.

I was driving north to Edinburgh for the first of three gigs that Gary Grainger and I were performing together, two solo shows on one bill. Gary had wanted to call it the ‘Road to Hull Tour’, but a gig in Hull had fallen through, as had a gig in York! I think we can get away with calling it a short tour!

I was looking forward to spending a couple of days in Edinburgh meeting friends and spending time enjoying a city I have come to know and love. The moors of Northumberland rolled out ahead; a stunning prospect also, was a brief sight of Lindisfarne and the sea off the east coast. What a day to be on the road.

Our first gig of the run, was in a venue I know well. The Blind Poet and the Pear Tree pubs are part of a larger complex of old buildings that are a hive of activity on most nights of the week. During festival (in August) they host a wide range of comedy and music, including gigs in the garden (see chapter 8), which is a popular watering hole for performers and punters alike. You can see a picture of Alex Petty, promoter and stage builder extraordinaire, in Chapter 8 of this diary, setting up the Counting House stage (upstairs from the Pear Tree).

Gary and I set up to play in the Blind Poet on a wet and rather gloomy night. I kicked off the night to a quiet house. A surprise visitor was Sandy Tweeddale, a great guitarist and Scottish blues- scene stalwart. I have seen Sandy play a couple of times, he always delivers a great driving guitar sound, often balanced with some subtle touches. I was pleased to see him, discovering as I did that he is old mates with Gary.

The night picked up when Gary went on stage, the audience responding well to Gary’s banter and ‘old school’ guitar style, picking and strumming his way through an eclectic set of blues and Americana. The set featured a wonderfully sounding Teleresonator, (seen in the pic below), a beast I definitely want to get my hands on! 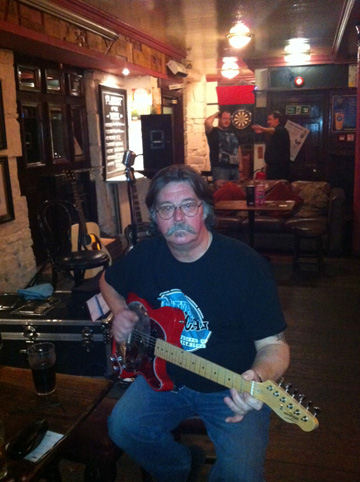 Gary and I parted company with a handshake, standing on the rain washed cobbles outside the Pear Tree. The streetlights reflected on the damp road, lit our end of gig debrief and farewells. Gary wanted to get back home (a three hour drive), as he had stuff to do the next day. I know some people think performing looks fun- it is, but the traveling can be a pain.

The following day I held on in Edinburgh to pick up the fee, before heading south to Newcastle. I was looking forward to playing the Monkey Junk session at the Butterfly Cabinet. I was intrigued by both the name of the session and the venue. On arrival it turned out to be a large, rather quirky, vaguely French style cafe. The audience was keen, quiet and attentive, listening and applauding with enthusiasm. It was great to perform a concert rather than provide a sound track to somebody else’s night out. The gig was a great success, both of us left with offers of more gigs.

I have been trying out a new amp, an Acus acoustic guitar amp. It is proving to be a great asset, producing a good clean sound. Compact, with a great digital reverb. I really enjoyed what it is doing with my Boucher, and the richness and edge it gave to my resonator.

The third gig was a real surprise and a gem. The Half Moon in Darlington is a pub, recently opened by two home brew enthusiasts. John Anderson and Dave Walker were gracious hosts who had even named one of their beers after me. I was so chuffed. The pub was rammed with a lively and enthusiastic crowd, all enjoying the beer, the music and the buzz. 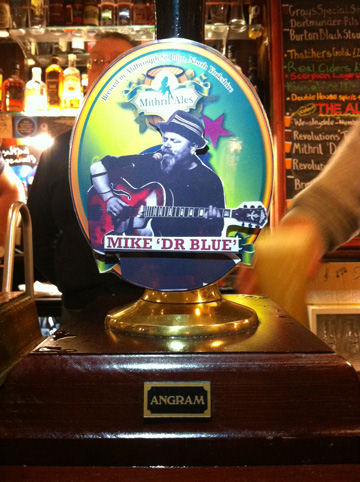 There was very little room to perform in, but the evening was none the worst for it. Both Gary and I played, what felt like, in among the audience. It reminded me of some gigs I did in Australia, where I played in the middle of an enthusiastic crowd all up for a party. The night at the Half Moon was what I always imagined the old Juke Joints in the southern states of America, where the blues comes from, were like. Working people, out on a Friday night, looking to kick back and have some fun.

I drove home with a grin on my face, having played to a room full of joyful loons. Job done. Thanks to Gary for sharing the three nights. While we were out, Gary was notified that he was nominated for a European Blues Award. Congrats!

I was put in mind of a gig I had been at in Ain’t Nothing But a Blues Bar in April, when Ian Siegal turned up, in fine form and expansive mood.

Ian got up with Niall Kelly and treated us all to some impromptu blues with the addition of some wicked banter. At one point Ian slipped into an impersonation of Mick Jagger, smacking his lips and calling over to Niall, “ Hey Keith, tune your guitar Maaaan.”

To the driving sound of ‘Shame, Shame, Shame’, Ian started talking directly to the audience:

” You are making me feel at home. It feels like I’m playing in my front room, I’m drunk and the room s full of strangers…. thank you for your wine California”. The set went on, with Niall and Ian riffing verbally and on guitar, Morgan Platt holding it all together on a bass pedal and tambourine- what a joy to watch three consummate performers holding court and entertaining a room full of blues fans, and a few startled tourists who had wandered in out of the rain!

The trip north was a success, three gigs, happy punters and offers of more gigs. The down- side was the eleven hundred miles of driving, some of it at night in the driving rain. In the end if you want to do the thing you love, you have to pay your dues!