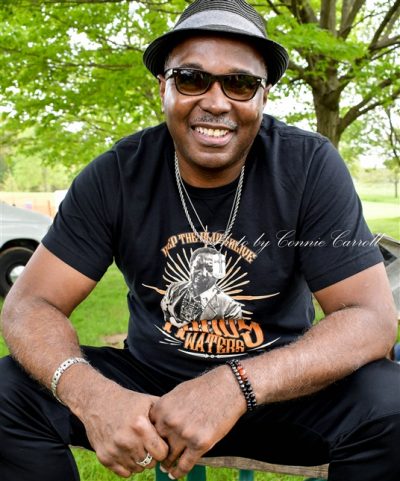 Joseph “Mojo” Morganfield knows he has some big shoes to fill. The youngest son of Muddy Waters, he is cognizant of the fact his father casts a long shadow. “Mojo” had also seen two older brothers establish themselves as seasoned blues performers when he himself wasn’t yet ready to pick up the microphone. However, times have changed.

Morganfield has been working hard the last few years on perfecting his craft. There have been voice lessons, endless rehearsals with his band The Mannish Boys and even steadfast practice at the guitar in the privacy of his own home. But it will still be some time before the public sees “Mojo” on stage with a Fender telecaster like his blues legend dad.

“I’m not going to embarrass myself,” said Morganfield. “I’ve been practicing and I’m getting there, but yeah, when it’s time I’m definitely going to bring out my guitar.”

He added, “I could play well enough not to embarrass myself but then my standards are a little higher (being the son of the legend).”

Morganfield has come a long way from the open mic performances in bars in Indiana and Westmont, Illinois where he cut his teeth a few short years ago. In fact, Morganfield was scheduled to perform overseas for the first time later this year. But then the Coronavirus pandemic brought the country, and the world, into lockdown.

“I was scheduled to go to Europe in the fall,” said Morganfield, who added that he had gotten offers to perform at other far away venues in the past, but turned them down because he didn’t feel as a performer that he was 100 percent yet. 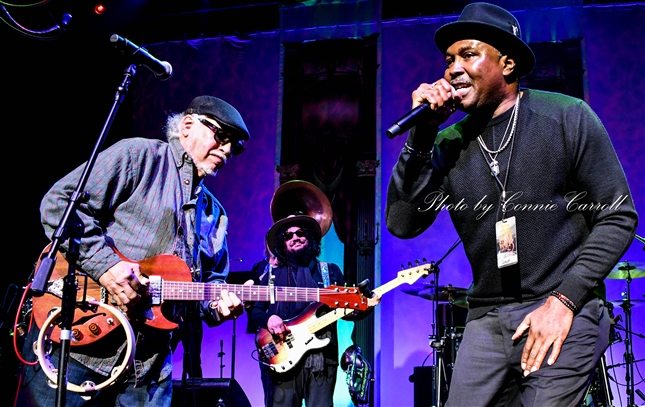 Morganfield and his band The Mannish Boys were sharpening their skills prior to the Coronavirus, with plans to hit the studio to record their first full-length album. That album, just like Morganfield’s debut performances in Italy, Germany and France, will have to wait. That’s OK though. Morganfield’s career has been moving along at a rapid pace. A little slow-down will give him time to reflect on his blessings. It was only three short years ago that he made his debut at the Chicago Blues Festival, as a featured guest of his brother Big Bill Morganfield.

“He gave me my first opportunity and then we killed it with ‘Mannish Boy.’ “said Morganfield, adding, “It was phenomenal. I’ve got it on video. I think I’ve looked at it a million times. It was my first introduction to the blues world.”

Before that, it was the small venue open mics with performers of all genres vying for drinking patrons’ attention. But when he took the Budweiser stage with his older brother at the Chicago Blues Festival, he truly realized, “I could do this,” he said. 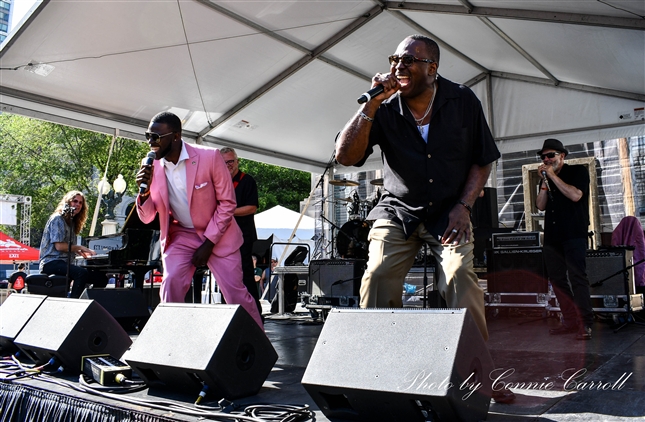 Morganfield has since become a full-time musician, although the lockdown due to the Coronavirus has forced him to go back to normal work, since live entertainment is presently a no-go.

“I’ve got to do something,” he said. “I can’t be locked in this house. I’ve got an essential job and I’m going to keep it until I can get back out and start performing. But before the virus I was full time with the music.” 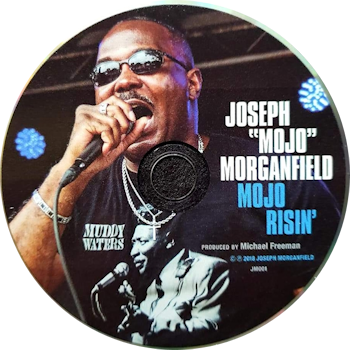 In 2018, Morganfield released an EP titled, “Mojo” Risin that contained two new songs and two cuts from his father’s catalog.

“I’m definitely proud of it,” he said. “Me, I’ve been around the blues all my life. I was the only son that Muddy raised.

“So I used to go to the rehearsals and the concerts and I was home when he practiced or people visited. But just being around him I always had that desire to perform.”

Morganfield added, “But you know, life happens. I got married and started having children. And I’m a father of seven so I couldn’t really rely on gigs to take care of my children, so I got a 9 to 5. Now that my children are older, in college and having babies, this is the perfect time for me to pursue the music. It’s still in my heart and always has been.”

Morganfield’s athletic prowess also resulted in the music being put on the backburner. He received a scholarship to play basketball at the University of Northern Iowa.

“When I started playing basketball I stopped doing my guitar lessons, which my dad did not like,” said Morganfield. “I was one of the best players at that time, so I got a full ride. He was proud of me. Don’t get me wrong but he didn’t want to see me put my guitar down. Not at all.” 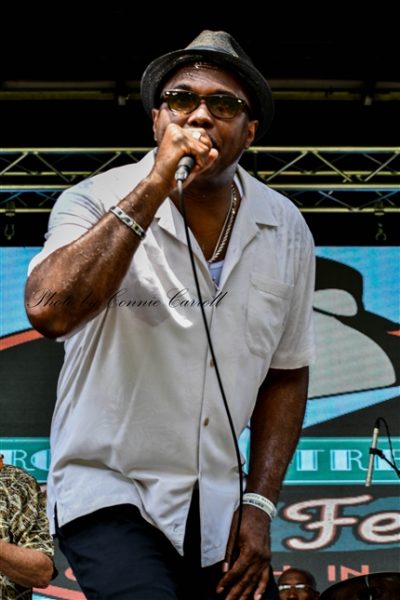 The seed to perform was sewn in Morganfield as a young child, around 11 or 12 years old, when he began to accompany his father to shows during the summer. His dad always allowed him onstage for the last number.

“He used to close his show with ‘I Got My Mojo Working.’ He’d call me up there and I’d do that song with him, which was great,” said Morganfield, adding, “He used to get mad at me because I would take the microphone sometimes and go to the other end of the stage so I’d get more time on the mic (laughs). But then he had this look he would give me. I knew to bring that [thing] back.”

Morganfield has many good memories of growing up with Muddy, including when they moved from Chicago to the more affluent Westmont, Illinois, around 1973 or 1974.

“I came from an area that was predominantly black, the inner city,” he said. “When we moved to Westmont, I remember hearing crickets and didn’t know what they were. Talk about a culture shock, right? It was all white. I got there in the third grade and my family, my siblings and I, we were the only black family in town.”

“But it was one of the best moves my dad made, to be honest. I got a great education, which I wouldn’t have gotten in a Chicago school,” said Morganfield. “I just got more opportunity. And then he got me out of a gang infested area. The area we moved from was a blessing to leave.”

Morganfield also recalls phone calls from members of the Rolling Stones, Johnny Winter, “Pops” Staples, Buddy Guy, as well as visits from well-respected Chicago blues performers, and also rock guitar god Eric Clapton. This was when “Mojo” started to truly grasp that his father was more than just a blues performer.

“I didn’t know the gist of it,” he said. “I didn’t know how famous he was. To me he was just my father and he was a musician and he sung the blues…But the first time I met Eric Clapton, I think that song “I Shot the Sheriff” was out, and that was one of my favorite songs, so for him to be at my house was incredible. Then I started to realize my dad was a bad dude.” 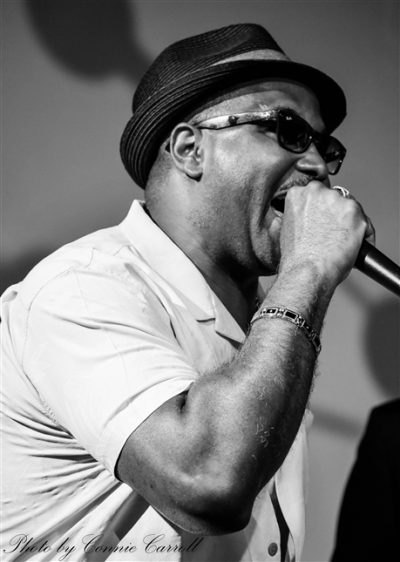 Of the three performing sons of Muddy Waters, each brings their own thing to the stage. Big Bill Morganfield sings and plays guitar like his dad and Mud Morganfield pretty much sticks to singing (though he has brought out the bass in the last couple of years), as he is blessed with a voice very close to his father’s. What will Joseph bring?

“I’m bringing charisma,” said Morganfield, who looks much younger than his 56 years. Asked if he takes care of himself, he surmises it’s just “good DNA.”

“My mom (Lucille McClinton) was a beautiful woman,” he said. Morganfield says he has a lot of energy and most of his shows are “upbeat.” Whereas Mud Morganfield pretty much stays true to the Chess Records era Muddy Waters sound, “Mojo” plans a modernization of sorts.

“I think it’s what’s needed now,” he said. “I’m working on my album and I’ve got some new songs and it’s going to show a different side of me and what I want to become. I’m still trying to find my own identity as we speak.”

Morganfield has twice been inducted into the Chicago Blues Hall of Fame, as a blues ambassador and as a blues promoter supporter (Morganfield is a spokesperson for his father’s estate). 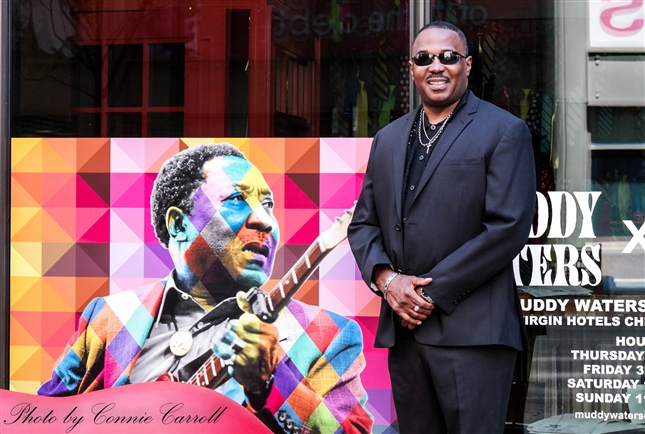 “Now I want to get in there as an entertainer. That’s my next goal,” he said.

Morganfield is focused and driven but he is also a realist. While he is the bloodline of the great Muddy Waters, he admits he still has a lot to learn.

“I’m not going to kid myself or fool myself,” he said. “I’ve got a lot to learn but I’m making great progress.”

What is left to learn or improve upon?

“Now it’s just experience pretty much. Going out there and doing it now,” said Morganfield. “The more I do it the more I’m going to sharpen my craft, and that’s something you can’t buy or can’t practice. You’ve just got to go out and do it.”

All photos used with permission.

Kirk Lang is a music researcher, historian, and writer based in Connecticut, USA. He is a main contributor to ‘EarlyBlues.com’ and Editor-in-Chief and inspiration for the creation of ‘EarlyR&B.com’. His biography is available here and he may be contacted here: kirklang@yahoo.com