‘Clarence ‘Gatemouth’ Brown Obituary’ – by Keith Woods, from Tales From The Woods 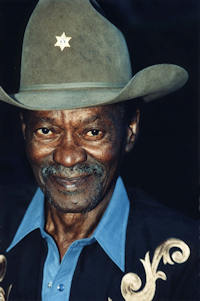 ‘Tales From The Woods’ raises a glass and says farewell to guitarist, fiddler and singer, the blues musician who encompassed Texas swing, country, Cajun, Zydeco and jazz, the wonderful Clarence ‘Gatemouth’ Brown who died on 8th September 2005 aged 81. Clarence had been suffering from lung cancer and heart problems and was evacuated from his home in Slidell, near New Orleans, shortly before hurricane Katrina hit the city. The musician had settled in his Slidell home, built above a waterway containing its own resident alligator, during the early nineties. “I’m built right up over the water and I can fish off the back of my deck,” he explained during an interview conducted a few years back. “The gator don’t bother me. If I leave him alone, he leaves me alone”. The loss of the home he loved would be difficult enough for the ailing 81 year old to handle. Katrina though, took most of his instruments and irreplaceable memorabilia; understandably he was heartbroken.

Yours truly was indeed privileged to catch this eclectic musician in action a number of times, mostly on his native New Orleans soil at the Jazz and Heritage Festival, as well as clubs around the city. His trips to the UK were a little thin on the ground although ‘Tales From The Woods’ veteran rockin’ scribe Shaky Lee Wilkinson and myself caught him at his unpredictable best one steamy hot summer’s evening which must be in the region of a decade and a half ago. A near capacity audience had turned out to pay homage to the virtuoso on a rare London visit. Lee and I even managed to gatecrash his dressing room (on what pretext is lost in the mists of time) where the air was thick with cannabis smoke. We found Clarence friendly enough, chatting away whilst puffing on a spliff.

Born on 18th April 1924, though a Louisianan by birth, he grew up across the state line in Orange, Texas. His father, a railroad engineer and weekend musician, taught him to play the fiddle. During the course of his very early life, he learnt the art of guitar and drums from his brothers. It was as a drummer that he launched his career playing with a local band, The Gay Swingsters, and later with a travelling revue, William Benbow’s Brown Skin Models. He eventually secured a permanent job drumming and singing with the orchestra at the Keyhole Club in San Antonio.

The year of 1947 would find a 23-year-old Clarence hitchhiking to Houston and presenting himself to entrepreneur Don Robey who owned the Bronze Peacock Club and would create a matching record label (Peacock Records). Robey became Brown’s manager and was soon hitting the R&B charts with sides like ‘Okie Dokie Stomp’. Throughout the latter half of the fifties, Brown proved to be one of the most bankable artists in the blues field. The turn of the following decade would see a massive falling out between Robey and himself. Clarence would later claim in numerous interviews that his former manager’s connections effectively blacklisted him for the remainder of the 1960s. He even swapped his guitar for a deputy sheriff’s badge in San Juan County, New Mexico although he did get a job in Nashville leading the houseband for the black music TV show, The Beat.

As it has so often been, it was Europe that put him back on his feet. After tours, festival appearances and recordings in France during the early 1970s, his personal makeover documented in albums like ‘Blackjack’ and ‘Makin’ Music’, a 1979 duet with country music musician Roy Clark. Come the 1980s, with the support of his manager Jim Bateman, he was confident enough in the breadth of his resources to fall back into the role of a bluesman as on his Grammy Award winning album ’Alright Again’ 1982 and with successors such as ‘One More Mile’ 1983 and ‘Standing My Ground’ 1989. Even on these blues based albums he would wander off to take in a Cajun fiddle tune or a jazz standard like ‘Take The A Train’. “I refuse to be labelled as a blues, jazz or country player” has been so famously quoted so many times over the years, preferring no doubt to be recorded as a musician of Americana which would accurately describe the albums he made throughout the remainder of his life, such as the self explanatory ‘American Music, Texas Style’ 1999, ‘Back To Bocalusa’ 2001, and most certainly his last ‘Timeless’ 2004, mixing blues and country songs and the swing styles of ‘Duke Ellington and Benny Goodman all thrown into the melting pot. Indeed, a true original.

Clarence “Gatemouth” Brown (April 18, 1924 – September 10, 2005) was an American musician from Louisiana and Texas known for his work as a blues musician, as well as other styles of music. He spent his career fighting purism by synthesizing old blues, country, jazz, Cajun music and R&B styles. His work also encompasses rock and roll, rock music, folk music, electric blues, and Texas blues.

He was an acclaimed multi-instrumentalist, who played an array of musical instruments, including the guitar, fiddle, mandolin, viola, harmonica and drums. He won a Grammy Award for Best Traditional Blues Album in 1983 for his album, Alright Again!. He is regarded as one of the most influential exponents of blues fiddle and has had enormous influence in American fiddle circles.

Brown was born in Vinton, Louisiana, and raised in Orange, Texas. His professional music career began in 1945, playing drums in San Antonio, Texas. He was given the nickname “Gatemouth” by a high school teacher who said he had a “voice like a gate”. His career was boosted when he attended a concert by T-Bone Walker in Don Robey’s Bronze Peacock Houston nightclub in 1947; Walker became ill, and Brown took up his guitar and quickly wrote and played “Gatemouth Boogie”, to the delight of the audience.

In 1949 Robey founded Peacock Records in order to showcase Brown’s virtuoso guitar work. Brown’s “Mary Is Fine” backed with “My Time Is Expensive” was a hit for Peacock in 1949. A string of Peacock releases in the 1950s were less successful commercially, but were nonetheless pioneering musically. Particularly notable was the 1954 instrumental “Okie Dokie Stomp”, in which Brown solos continuously over a punchy horn section (other instrumentals from this period include “Boogie Uproar” and “Gate Walks to Board”). “Okie Dokie Stomp” was also recorded by Cornell Dupree in the 1970s, who also had a commercial success with it. As for his gutsy violin playing, Robey allowed Brown to record “Just Before Dawn”, his final release on the Peacock label, in 1959.

In the 1960s Brown moved to Nashville, Tennessee to participate in a syndicated R&B television show, and while he was there recorded several country singles. He struck up a friendship with Roy Clark and made several appearances on the television show Hee Haw. In 1966, Brown was the musical director for the house band on the short-lived television program, The !!!! Beat.

However, in the early 1970s several countries in Europe had developed an appreciation for American roots music, especially the blues, and Brown was a popular and well-respected artist there. He toured Europe twelve times, beginning in 1971 and continuing throughout the 1970s. He also became an official ambassador for American music, and participated in several tours sponsored by the U.S. State Department, including an extensive tour of Eastern Africa. Brown appeared at the 1973 Montreux Jazz Festival, where he jammed with American blues rock band Canned Heat. In 1974, he recorded as a sideman with the New Orleans pianist Professor Longhair on his album, Rock ‘N’ Roll Gumbo (originally a Blue Star Records release). He moved to New Orleans in the late 1970s. In 1979, through his manager at the time, Jim Halsey, Brown embarked on a 6-week, 44 concert tour of the Soviet Union. This was an historic event as it marked the first time the Soviet Union made a contract with a U.S. private citizen (Jim Halsey) as regards a musical tour. All previous tours were under the auspices of the U.S. State Department. To date, this was by far the most extensive tour an American band had taken in the USSR.

In the 1980s, a series of releases on Rounder Records and Alligator Records revitalized his U.S. career, and he toured extensively and internationally, usually playing between 250 and 300 shows a year. He won a Grammy in 1982 for the album Alright Again! and was nominated for five more. Alright Again! is credited with putting Brown back on the musical map. He also won eight W. C. Handy Awards.

In 1999, Brown was inducted into the Blues Hall of Fame.

In his last years, he maintained a full touring schedule, including Australia, New Zealand, South America, Africa and Eastern Europe. His final record “Timeless” was released in 2004.

In September 2004, Brown was diagnosed with lung cancer. He already had emphysema and heart disease, and he and his doctors decided to forego treatment for the cancer. This greatly affected his musical career. His home in Slidell, Louisiana, was destroyed by Hurricane Katrina in August 2005, although he had been evacuated to his childhood hometown of Orange, Texas before the storm hit. He died there on September 10, 2005, at the apartment of a grandniece, at the age of 81. Brown is buried in the Hollywood Cemetery in Orange. Flooding caused by Hurricane Ike in September 2008 damaged his grave. His casket was one of dozens that floated out of their burial sites. His grave has since been refurbished and through the estate funds, a headstone has been erected in his honor. A marker honoring Brown was placed by the Texas Historical Commission next to the flagpole at Hollywood Cemetery.

The rock composer Frank Zappa, in his autobiography, The Real Frank Zappa Book (1989), credited Brown, along with Guitar Slim and Johnny “Guitar” Watson, as important influences on his guitar playing.

On June 25, 2019, The New York Times Magazine listed Clarence “Gatemouth” Brown among hundreds of artists whose material was reportedly destroyed in the 2008 Universal fire.

Brown was married and divorced three times. There are four children: three daughters, Ursula Brown of Houston, Celeste Biles of Vista, California, and Renée Brown of New Orleans, and a son, Dwayne Brown, of Oklahoma City.