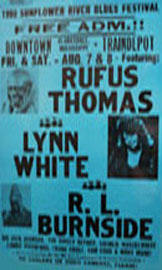 Visitors came from all over the US, and from Canada and Europe to the 11th Annual Sunflower River Blues and Gospel Festival held on the 7th, 8th and 9th of August in the historic town of Clarksdale, MS. The most popular events were held on the main stage on the site of the old railroad depot, now known as Blues Alley.

The first day opened with a group of youngsters keeping the Delta’s blues heritage alive through the efforts of Johnny Billington, who also performed at the festival. Johnny was later presented with an award for his contribution to the blues, as was Howard Stovall of the House of Blues. The Wesley Jefferson Southern Soul Band, without leader Wesley, currently recovering from a serious auto accident, gave a taste of modern Delta blues. More traditional blues was supplied by the Jelly Roll Kings, who gave a fine performance despite finalising the band’s line-up minutes before going on stage. The excellent harmonica work and vocals of Frank Frost were underpinned by the tasteful drumming of Sam Carr.

As the evening wore on, the out-of-town visitors began to be outnumbered by the residents of Clarksdale and surrounding areas. This was due to the popularity of soul songstress Lynn White. Wearing a shimmering red dress, she roused the crowd with a series of funky soul ballads like “Feel Like Breaking Up Somebody’s Home”.

The night ended with home-town favourite Big Jack Johnson and his band, the Oilers. An energetic and entertaining set include classics like “Turn On Your Lovelight”, “Ain’t Nothing You Can Do” and “Sweet Little Angel”. A couple of dancers shaking their moneymakers on stage added to the fun.

The second day’s performances on the main stage began with Othar Turner’s Fife and Drum Band who had just paraded from the acoustic stage on the back of a truck. At the acoustic stage Othar had been embarrassed because his fife had been left at home by a member of his family. Now a member of the crowd produced a fife he had originally purchased from Othar, and the band was then able to play their set to great acclaim.

After a set by T-Model Ford, Willie Foster, nowadays in a wheelchair, played a good, entertaining harmonica-led set, including several Muddy Waters favourites. Johnny Mohead’s brand of blues-rock was not to my taste, but pleased a large portion of the crowd. The North Mississippi All Stars, featuring three members of the Dickenson family, father Jim and sons Luther and Cody, brought us back to the blues.

Anticipation was building up for RL Burnside. Unfortunately, so were the black storm clouds, and soon rain and high winds forced events to a premature close just as RL began his set. As the chances of a resumption faded, the crowd drifted away. The performances by Burnside, Charlie Musselwhite, Kinsey Report and Carla Thomas, deputising for father Rufus, who is recovering from heart bypass surgery, were cancelled. Those that explored the juke bars could find RL Burnside at a crowded “Crossroads”, Charlie Musselwhite in “Coconut”, T-Model Ford at “The Rivermount” and, I believe, Robert “Bilbro” Walker at Sarah’s Kitchen.

The highlight of the festival for many was earlier in the day on the acoustic stage outside the Delta Blues Museum. A smaller but discerning audience was treated to a feast of down-home Delta blues. Mr Tater did a set which included “Cocaine Woman”. Pat Thomas from Leland, whose father is the well-known bluesman James “Son” Thomas, deputising for the ailing Lonnie Pitchford, was a surprise favourite with the crowd, with an easy vocal manner, sometimes slipping into a Skip James style. His set included “Big Fat Mama”, “Good Morning Schoolgirl” and “Catfish Blues”, all of which would reappear in other sets that day, “Sugar Mama” and “Mystery Train”, and re-tuning to slide, “Dust My Broom”.

Eddie Cusic, discoverer of Little Milton, started off with “What’d I Say”, and continued with a number of familiar blues tunes including “Catfish Blues”, “It Must Have Been The Devil” and “Ludella”. Johnny B Moore played a good set of amplified blues including “Crawling Kingsnake”, “40 Days and 40 Nights”, “Red Rooster” and “Baby Please Don’t Go”. An eager crowd pressed forward for Dave “Honeyboy” Edwards. Accompanied by washboard, bass drum and harmonica, Edwards obviously enjoyed himself as he went through a set including “Sweet Home Chicago”, “Little Boy Blue”, “Big Fat Mama”, “Country Man” and “That’s All Right”. The acoustic stage events ended with a brief appearance by Othar Turner’s band before they headed to the main stage.

The stage events were augmented by an educational program which included a talk on “Voudu Lyrics in the Blues” by Phoenix Savage, a presentation of new theories on the life of Sonny Boy Williamson II by Professor Mojo (Bill Donoghue), with some good European TV performances on video, and a screening of Robert Palmer’s “Deep Blues” film presented by Robert Mugge. A popular event was poet John Sinclair’s reading of some of his poems paying tribute to his blues heroes.

Dick Waterman did a presentation from his excellent photographic collection, accompanied by some good stories, told with a great deal of affection for his subjects.

By Sunday afternoon many of the visitors had left town. The festival closed with a rousing series of gospel performances, the highlight of which was a set by the Bell Singers of Memphis. The small number of remaining out-of-towners clapped along with the enthusiastic local crowd.

Footnote (2005) : Since I wrote the above article, we have lost Rufus Thomas, Willie Foster, Frank Frost, Othar Turner and Lonnie Pitchford. The Delta Blues Museum has moved from the old Carnegie Library to a new site in Blues Alley. Dick Waterman has just published a book of his blues photographs, with accompanying stories.