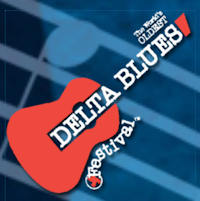 The gates opened at 10.30 am and, not knowing what to expect, we headed for the venue quite early, but there wasn’t much going on so we headed for downtown Greenville and its couple of river casinos to pass the time. The music was scheduled to start at 12.00 so we returned there just after that. After we parked the car we noticed around us that, from every car that was arriving, the folk were unloading their ice boxes full of beer, their fold up picnic seats and sun umbrellas, while all we had were a couple of towels and a bottle of water each. It was also very hot about 90° with no shelter from the sun.

Luckily for us, once you had paid you were free to come and go as you please, even with the car. So as all the early performers were virtually unknown or acoustic we decided to drive out to a close-by Shoney’s Restaurant for a bite of lunch and also to stock up on water at the large supermarket next door. When we were in the shop we noticed they were selling fold up chairs for just $9.99. Jane quickly grabbed one to buy.

“What’s the good of that? We can’t take it home with us” I boldly said.

“Who cares? If you think I’m sitting on the ground all afternoon you’re dafter then you look,” was the answer I received.

I was a brave boy and soldiered on with just a towel. We returned to the gig and found a nice spot fairly near the stage, fitting in with the crowd, 97% black. Now she had her chair I was feeling more confident that I would not have to do a 42 mile round trip ferrying her to our hotel when she got fed up, which if had to be done would have to be done soon before the top five artists came on. But bless her she lasted until almost the end.

Mickey Rodgers and his soul band were playing when we returned. Mickey had been taught to play the guitar by Hubert Sumlin and had performed on stage in the UK with The Rolling Stones back in 1964. He was joined on stage first by Rickie “Sholo” Johnson, a local singer from Leland and a regular performer at the Heritage festival. He sang two numbers “Starting Point” and Marvin Gaye’s “Let’s Get It On”. A local Greenville lady now residing in Texas, Barbara Looney, followed him singing “Shake Rattle & Roll”, Betty Wright’s “Tonight is the Night” and a fantastic ballad “So Cold In My Bed” She modelled herself on Ko Ko Taylor and had the voice to prove it.

Patrice Moncell was next on, listed as a jazz and gospel singer on the Internet; sadly she was only allocated 30 minutes, so only had time for three numbers including “Joy & Pain” and “Stormy Monday”.

Next up was white pianist Victor Wainwright who looks a bit like Dr. John. Time for me to have a wander round looking at T-Shirts, food stalls etc. He was also only allocated 30 minutes, and he sounded all right from a distance. Jerry Lee fans would have loved him.

Still only 4.45pm and daylight; the young up and coming Grady Champion was next. This Shanachie recording artist mainly sang his own penned numbers but also Hendrix’s “Hey Joe” and especially for Dave Carroll who was way down south in New Orleans “Sweet Home Chicago”.

While all this was going on the early performers were doing their thing again on a smaller stage at another part of the field with a much smaller band of supporters, I counted 20, but it was still quite early. As the evening closed in the fans started coming in thick and thin. A couple who sat next to us had a spare chair and asked if I would like to use it, they must have Mickey Rodgers & Barbara Looney Grady Champion  taken pity on me as my backside and knees were now beginning to hurt and as the crowds got thicker moving around the field was getting harder. This was music to my ears like a good day at the bookies.

“Yes please, yes please, thank you thank you.” What a great couple, I thought; pity they were smoking cigars or whatever it was.

Back to the main stage with next on the one and only “Queen Of Beal” Ruby Wilson. I last saw her at BB King’s Club in 1994 moving about the stage, rocking the night away, but I was taken aback to see her being helped on stage holding a Zimmer frame. I had read that she had had a MILD stroke but she explained it had been far from being mild and that she had been on death’s doorstep for four months in a Jackson hospital.

Choosing to stand and sing I thought was very courageous of her, after all her troubles. Her voice was still in great form starting with “Let The Good Times Roll” and following on with several other numbers including “The Thrill Is Gone”, “Respect Yourself”, Johnny Taylor’s “Last Two Dollars”, “Sitting on the Dock Of The Bay” (well somebody had to sing it), finishing with an appropriate number “Thank You For Letting Me Be Myself”. There was also a version of “What You Won’t Do For Love” sung by her son. Ruby was pleading with the folk to buy her CD to help pay for her medication; I may have bought one if I had found where they were selling them.

It was now dusk and the crowds were still pouring in. It was now time for J Blackfoot who I last saw in 2009 at Porretta. When he came on the stage I sensed that this was not the same guy that my brother and Dave Thomas couldn’t stop raving about, as he seemed a lot calmer and started singing sitting down instead of moving about the stage. He then told us that he too was getting over a stroke and that he had been diagnosed with cancer, all within the last year.

His numbers included “In My Bedroom” and “I’m Just A Fool For You”. He wanted to sing The Soul Children’s number “The Sweeter He Is” but his female singer who was to join him on stage and sing the high notes had taken ill, so it was “Hearsay” instead. Willie Clayton joined him on stage to sing “I Love You Dear Lord” then he closed with “Taxi” (what else?)

The next on was the old soldier Bobby “Blue” Bland singing his way through a lot of his old favourites including “There Ain’t Nothin’ I Can Do”, “Further Up The Road” and “Every Day I Have The Blues” ending with “Members Only”. He too was sitting all the time; still at 81 it’s no surprise but next to him was his band conductor wearing a neck support. I was beginning to think that this was especially for performers convalescing. Still I was enjoying it and so were most of the women, all very drunk dancing around shaking their fat bums.

It was now packed, dark and although it was still only nine o’clock it seem a lot later. I just wanted Willie to come on so I could get to bed. But we had to put up with Bobby Rush first. Personally I find him very boring. It’s good to see the fat woman’s bum dance but you need to be near the front to appreciate it, his singing is repetitive and his act is crude, never the less all the women loved it, except my wife “He’s a dirty old man” were her words. Well he is 76 years old so she’s probably right. At last the long awaited Willie Clayton came on, starting with tributes to Tyrone Davis and Johnny Taylor “If I Could Turn Back The Hands Of Time” and “Party Like We Used To Do” then several numbers from his new CD which seem to drag on and he started time wasting, singing the same lines over and over again and crowd participation on “Unconditional Love”, “Something that I Feel?”, “Baby What You Want Me To Do”.

The folk next to us were ready to go and wanted their chair back so we gave them the one we bought as well. They started chatting to us and, when they found out we were English, said they knew we were different because we talk funny. They were the ones talking funny; he said to me what sounded like other was best man at somebody’s wedding. But he was actually saying that his brother was in Afghanistan.

As Jane had now lost her chair we decided it was time to leave as Willie was just coming to an end singing “Three People”.

What happened next was unbelievable. Jane had just commented about all the rubbish laying around, stepped on a beer can, fell over and hurt her leg. We struggled back to the car and took nearly an hour to get out of the car park. Apart from that final incident a great time was had by all and we saw how friendly and helpful the local people were.

This was a festival mainly supported and sponsored by local Mississippians with a few outsiders, Germans, Swiss, Israelis and as for Brits, I think we were the only ones.