One of the most unique and intimate concerts from the British blues revival of the 1960s was the “Blues and Gospel Train” filmed in a suburb of Manchester. On 7th May 1964, Manchester based Granada Television produced a musical television special. Directed by Johnnie Hamp, it featured performances by Muddy Waters, Sonny Terry & Brownie McGee, Sister Rosetta Tharpe, Rev. Gary Davis, Otis Spann and Cousin Joe Pleasant, all African American musicians who were touring Europe with the 1964 American Folk Blues and Gospel Festival tour (see note 4 below). Muddy’s band also featured Ransom Knowling on bass and Willie Smith on drums. For filming, Granada TV transformed the disused Wilbraham Road railway station to the south of Manchester into “Corltonville”, giving it the supposed appearance of a southern US-style station. The station was dressed in American-style bales of cotton, sacks, crates, broken-down farm equipment, washtubs, wanted posters and even a few chickens and a couple of goats. The platform on one side of the tracks was converted into the stage, while the platform on the other side seated the audience of some 200 enthusiastic blues fans.

The reason the concert was made in Manchester is because, two years before (1962) saw the first ever American Folk Blues and Gospel Festival tour of Europe have one concert in the UK – in Manchester, with the second tour in 1963 playing both Manchester and London. Johnnie Hamp, the Granada TV producer (See note 1 below), had booked them in 1963 and did so again, only instead of it being in a studio, he had the idea of staging it in a disused railway station in Manchester. The idea for the station set came from an early show he had done, in which he hired three trains as a backdrop for Little Eva’s Loco-motion. Hiring them meant he had a relationship with the railways so having been tipped off about the derelict station he arranged for a train as well. The imagery of trains, whistle blowing in the distance, is one that is long associated with the blues. 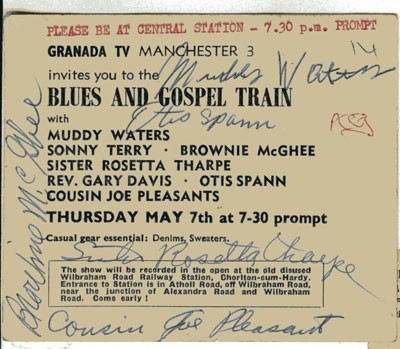 Fans who were lucky enough to get tickets were instructed to meet at Manchester’s Central Station (now the G-Mex Conference Centre) at 7.30pm that evening (not knowing where they were going) for a short train ride to the abandoned Wilbraham Road station (See note 2 below). The train (an Ivatt Class 2MT 2-6-0 for rail enthusiasts) was fitted with a cowcatcher and a lamp on top of the smokebox to resemble an American steam loco. When the train pulled in to the station the 200 strong audience poured out of the train, passing Muddy Waters, who was singing ’Blow Wind Blow’, then finding temporary seating on the platform. 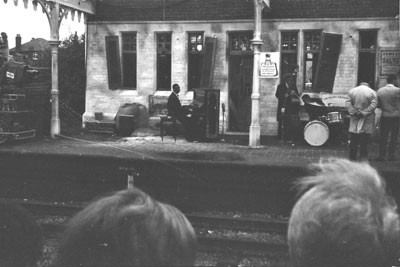 Otis Spann at the piano and Sonny Terry & Brownie McGhee ‘on stage’ at Wilbraham Road on 7th May 1964
You can just make out an old Granada TV camera on the far left.
Photo courtesy Brian Smith (See note 3 below)

The full list of performances, in order of appearance:

Muddy Waters: “You Can’t Lose What You Ain’t Never Had”

Sister Rosetta Tharpe: “He’s Got the Whole World in His Hands”

Whilst recording the concert it was interrupted by a heavy rain downpour lashed the station and just after Sister Rosetta Tharpe arrived, brought in by horse and carriage, appropriately beginning her set with a performance of “Didn’t It Rain”. Sister Rosetta Tharpe couldn’t believe she was bought in by horse and carriage when she was used to limousines! When she arrived she asked if she could change her opening number to “Didn’t It Rain”. The brilliant sequence when she and Cousin Joe cakewalk along the rain-soaked station coupled with her stunning version of the song and outstanding guitar playing was one of the highlights of the concert.

The complete concert was transmitted on 19th August 1964 to 12 million viewers and is available on DVD as part of ‘American Folk -Blues Festival: The British Tours 1963-1966’. It’s not of the greatest quality, but it’s still interesting to watch. Rev. Gary Davis’s contribution appears to have been cut, but much of the show is intact.

Here is a brief extract of the concert (from YouTube):

Here is a short film about the concert ‘When Muddy Waters rolled in to Manchester’ by CP Lee with Brian Smith:

Leading music academics have agreed that the “Blues and Gospel Train” 1964 concert was ‘massively culturally significant’.

TV producer, director, presenter Johnnie Hamp was with the Granada Group for over 30 years, most of that time as Head of Light Entertainment. He also appeared many times on television and radio as a presenter and guest, both here in the UK and in the USA, and was responsible for the first major TV appearances of countless artistes – from The Beatles in the 60’s to Lisa Stansfield twenty years later – with names like Paul Daniels, Eric Clapton, Cannon and Ball along the way.  Read more at https://en.wikipedia.org/wiki/Johnnie_Hamp and http://www.johnniehamp.co.uk/.

The station was opened as Alexandra Park by the Manchester, Sheffield & Lincolnshire Railway (MSLR) on the 1st September 1891. The station was situated on the MSLR’ Fallowfield Loop line, a 7 mile route that linked the Midland Railway’s Manchester South District Line following an indirect route around the southern suburbs of Manchester. The reason for the line was to give the MLSR access to Manchester Central Station.

The station was located on the eastern side of Alexandra Road South. It had a handsome red brick single storey building which straddled the line at street level. The building connected to two platforms by way of covered steps; each platform had a substantial canopy. There was a signalbox at the east end of the station on the north side of the line controlling access to the goods yard which comprised four sidings. 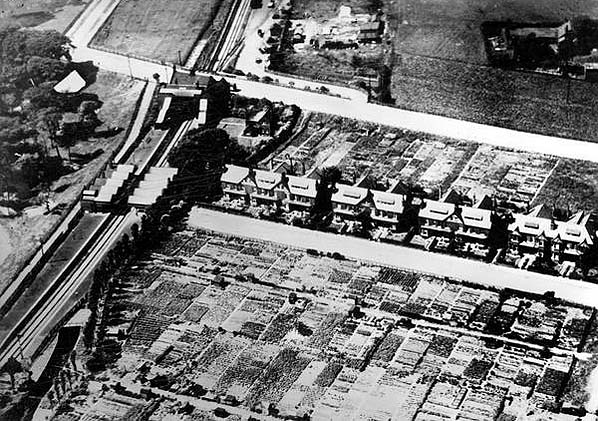 During the 1950’s services dwindled on the Fallowfield loop line and on 7th July 1958 the last stopping service was withdrawn and Wilbraham Road Station closed to passenger services but remained open for goods traffic until 4th August 1958. Regular passenger express services continued to use the line through Wilbraham Road until the closure of Manchester Central in 1969. By this date there was just one train a day. After that date it was only goods services passed through and the last goods services used the line in October 1988.

After closure to passengers the station remained intact for some years, as can be seen in 1964 performing its final role as a backdrop for the concert.

Eventually the station buildings were demolished and today only some residual brickwork of the platform edges survives but the Station Master’s house is still in use as a private residence.

In 2001 the route of the Fallowfield Loop line was converted into a cycleway.

Brian Smith is one of the most prolific photographers of blues artists in Europe, with his photographs, particularly of the British Tours of the American Folk Blues Festivals, being used by publishers and record companies throughout the world. His book “Boom Boom Boom Boom: American Rhythm & Blues In England 1962 – 1966,  The Photographs of Brian Smith” will be published soon.

The 1964 American Folk Blues & Gospel Caravan, organised in the US by George Wein, tour managed here by Joe Boyd, and booked by the UK Harold Davison agency,  was not linked with the Horst Lippmann/ Fritz Rau organised AFBF tours, which were managed in the UK by Harold Pendleton’s National Jazz Federation.

[With thanks to reader Jim Clay for the information]

“The First Time We Met The Blues” by David Williams, published by Music Mentor Books (2009)