Belzoni is a city in Humphreys County, Mississippi, in the Mississippi Delta region, on the Yazoo River. The population was 2,235 at the 2010 census. It is the county seat of Humphreys County. It was named for the 19th-century Italian archaeologist/explorer Giovanni Battista Belzoni.

The area was named Farm-Raised Catfish Capital of the World in 1976 by then Governor Cliff Finch, since it produces more farm-raised catfish than any other U.S. county. About 40,000 acres (160 km2) of the county are under water in ponds used to grow catfish. About 60% of U.S. farm-raised catfish are grown within a 65-mile (100-km) radius of Belzoni. The title “Catfish Capital” is also claimed by Savannah, Tennessee, Des Allemands, Louisiana, and Selkirk, Manitoba. Belzoni is known for the World Catfish Festival held every April.

The area that eventually became Belzoni was originally known as “Greasy Row” because of saloons along the bank of the Yazoo River, which was the main transportation route until replaced by railroads. In 1895, a charter was granted for the village of Belzoni, although the area had been settled by European Americans and African Americans for several decades previously. It was developed for cotton plantations before the Civil War and relied on agriculture well into the 20th century. Steve Castleman, who secured the charter, was elected as the first mayor of Belzoni. When Humphreys County was formed by the state legislature in 1918, Belzoni was selected as the county seat.

Belzoni was the site of the murder of an early civil rights pioneer. The Rev. George W. Lee, an African American minister who was seeking voting rights for the disenfranchised blacks of the Mississippi Delta and registered to vote, was murdered in 1955 in “Bloody Belzoni” by white residents committed to upholding segregation. His killers were never found, as the governor of Mississippi, Hugh L. White, refused to investigate the case.  Many consider Lee the first martyr of the modern civil rights movement.

As an undergraduate at the University of California, Berkeley, Margot Adler, later a National Public Radio correspondent, was active in the voter registration drive in Humphreys County (Belzoni) in the summer of 1965, before the passage of the Voting Rights Act on August 6 of that year. In 2000, she recalled:

“I remember how difficult it was to register people: the fear was palpable. I remember that after one month of daily work there were only seven people registered, and a bunch of us almost got ourselves killed after being chased onto private property by a group of men who belonged to the White Citizens Council”. She said that the civil rights movement changed Humphreys County, and bettered the lot of African Americans. “There was real change in Belzoni. Streets were paved in hog town, sewers no longer overflowed into the dirt streets. Several black families I knew from then have held political office during the last decade”. In 2006, Belzoni elected Wardell Walton as mayor, the first African-American to hold the position. He was re-elected to a second term. He was succeeded in 2013 by Lenora Sutton, the first female mayor of Belzoni. In 2017 Carol M. Ivy was elected mayor.

Belzoni’s role in history has been recognized primarily through historical marker campaigns. The Mississippi Blues Trail has two markers located in city limits: one for Denise LaSalle, who spent her childhood in Belzoni; and another for Turner’s Drug Store, an early sponsor for radio shows that broadcast Delta blues, and location of some performances by native artists Sonny Boy Williamson II and Elmore James. There is a marker for Reverend George Lee as part of the Mississippi Freedom Trail, detailing his contribution to the Civil Rights movement in Mississippi, located near his burial site. In 1990, the local African-American community placed concrete markers on each side of George Lee Avenue.

Other attractions located in Belzoni include the Catfish Museum; Jaketown Museum, which contains artifacts of a nearby Native American mound; Mama’s Dream World, a museum commemorating Ethel Wright Mohamed; and Wister Gardens, a local garden highlighting local flowers and plant life, often used for events in the area.

In the early-2000s, the city, in conjunction with the Humphreys County Art Council and Belzoni-Humphreys Development Foundation, sponsored the art project Catfish on Parade, a collection of fiberglass catfish decorated by local artists. Each catfish’s design is based on a reference to its specific commercial sponsor (“D. Fin-Der, Esquire” sponsored by a local law firm) or on a theme chosen by that sponsor (“Fishin’ for Words”, detailing works and images of famous Mississippi writers).

From a blues perspective there are two more important features of Belzoni:

One is Old Belzoni Jail where Charlie Patton was incarcerated, circa 1933-34. Patton’s incarceration in the Belzoni jail was apparently the result of Patton being intoxicated and/or causing a disturbance. The jail is still standing but it is in a very derelict condition as the photos below show. Many windows are boarded up, other windows are missing completely, the exterior is starting to crumble and the building’s interior is also decaying. Charley Patton’s “High Sheriff Blues,” Vocalion Records in New York on 1 February 1934, is about Charley Patton’s incarceration in the Old Belzoni Jail. 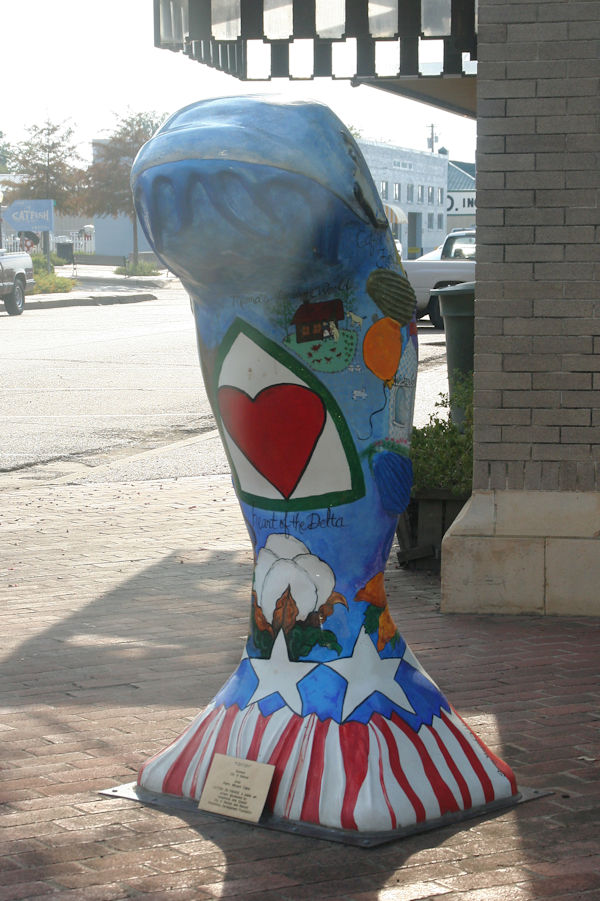 One of the fibreglass Catfishes 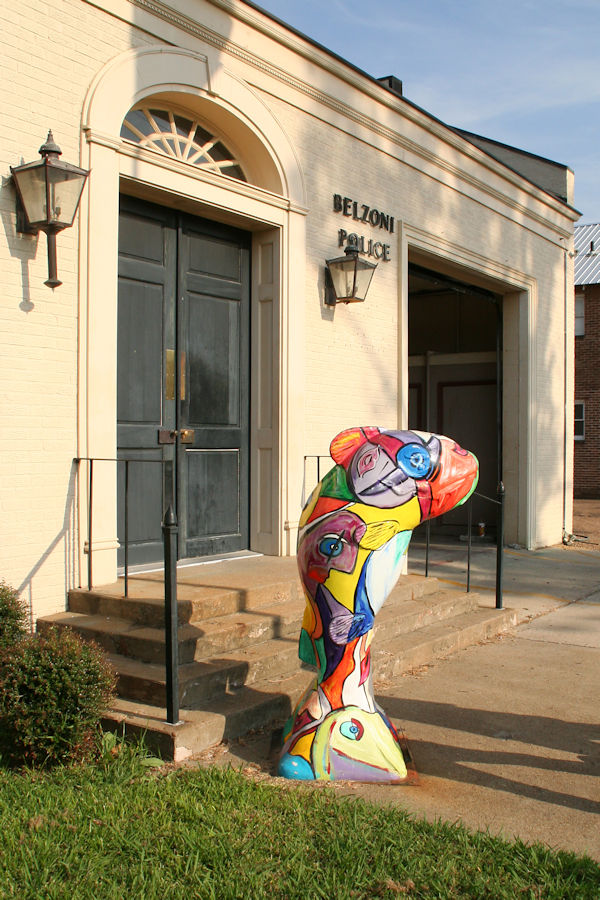 Even one outside the police station 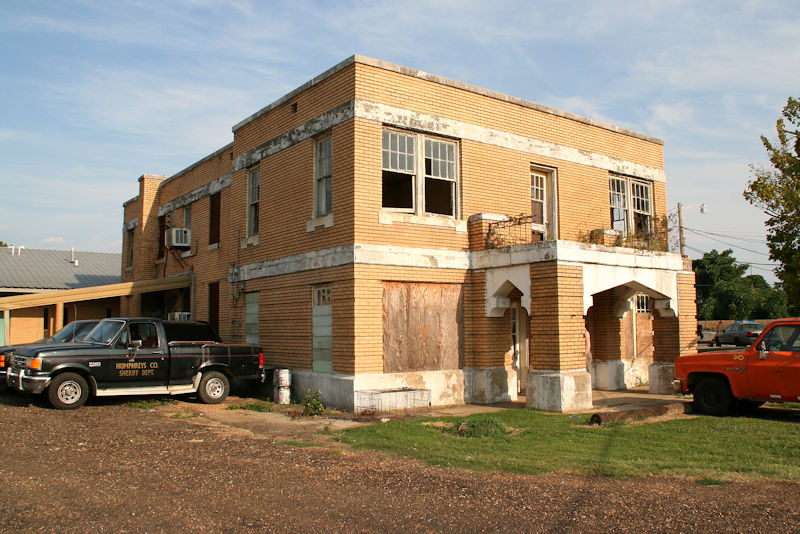 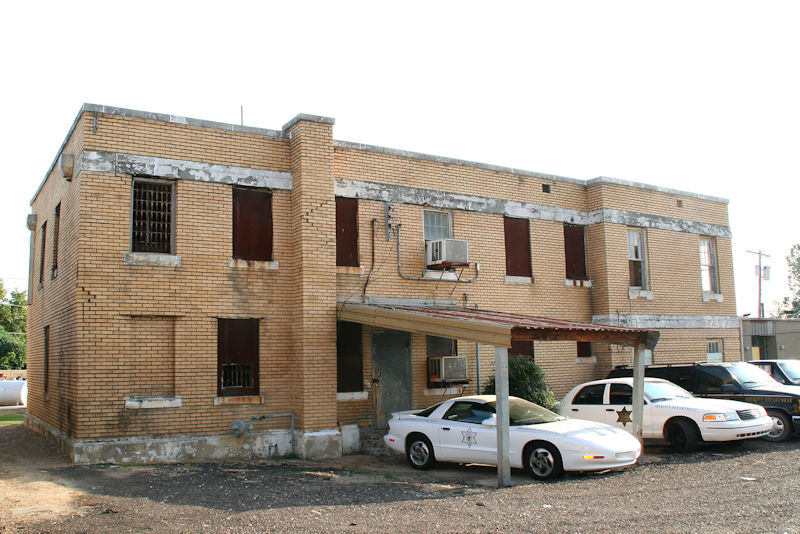 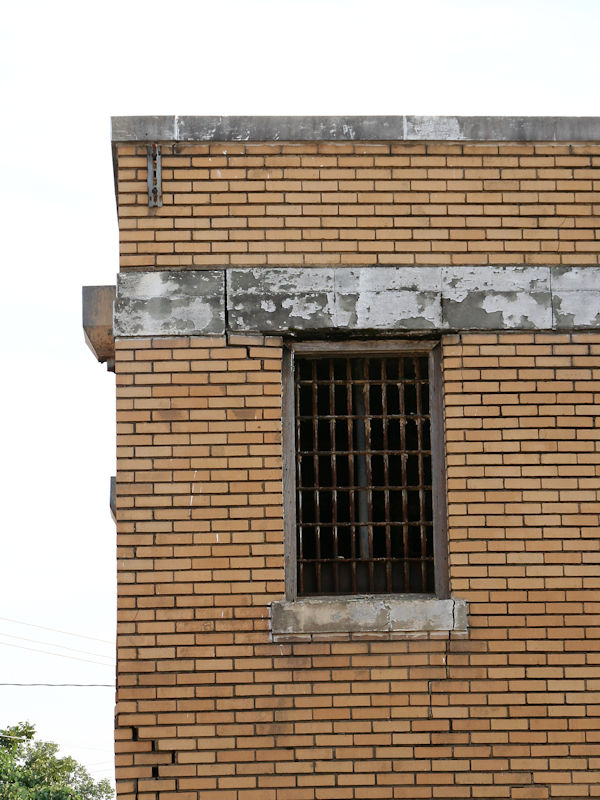 Was this Charlie’s cell? 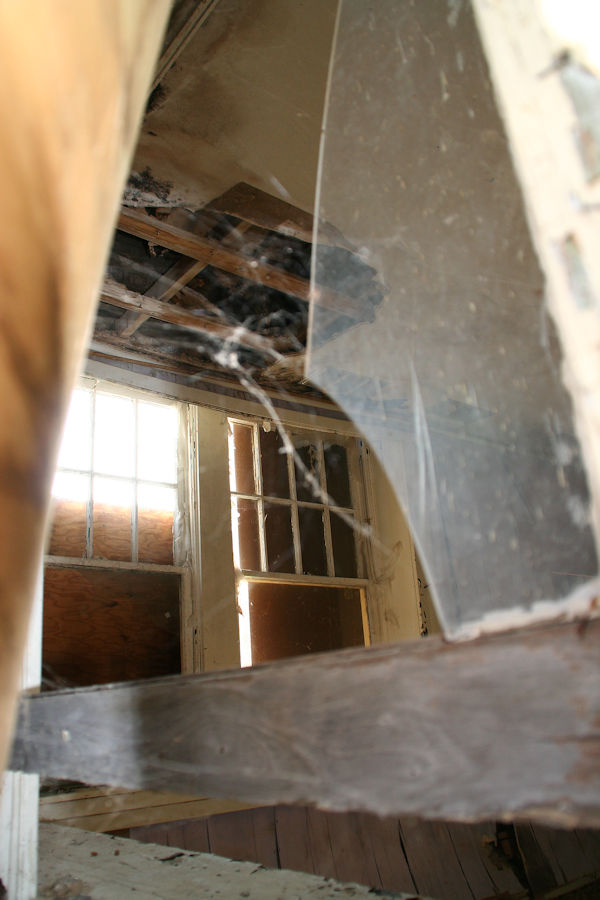 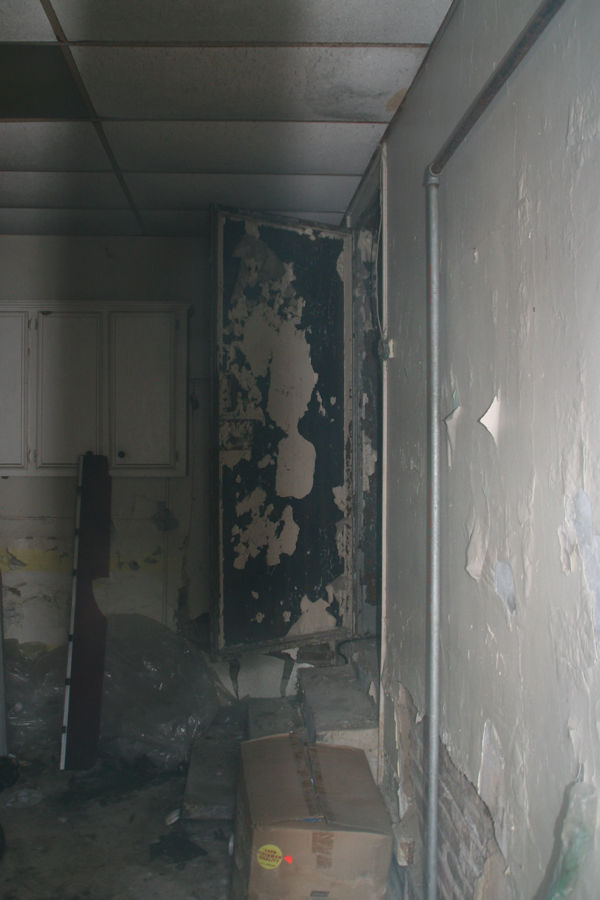