Miscellaneous Articles – From Spirituals to Swing

From Spirituals to Swing 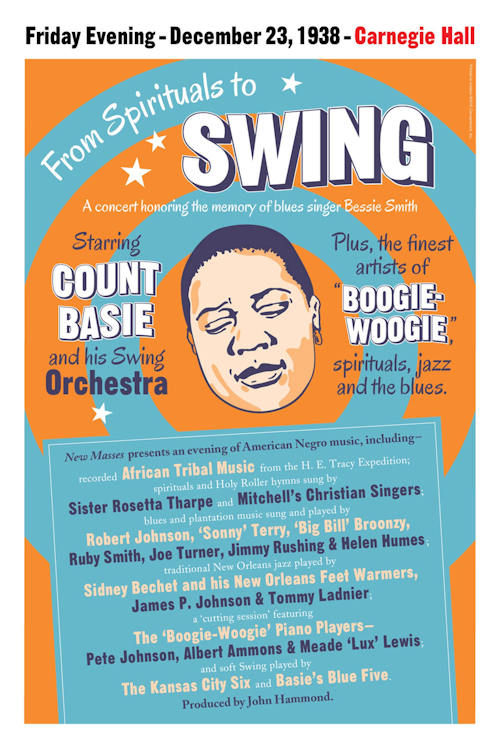 This is a re-creation of a promotional poster for the 1938 “From Spirituals to Swing” concert, featuring Count Basie, Robert Johnson, Big Bill Broonzy, Sidney Bechet and many more blues and jazz greats. In 1938, producer John Hammond decided to present an ambitious concert documenting the history of “American Negro music, from spirituals to Swing.” Hence the name, and hence the historic night at New York’s Carnegie Hall that December. Intended as a tribute to Bessie Smith, who had died the previous year, the concert ended up being a memorial to Robert Johnson as well, who died shortly before coming to New York to appear as one of the featured acts. Hammond used Count Basie, and his extremely progressive and influential orchestra of the time, as the host band. In spite of Basie’s edgy soloists, his material never strayed too far from its Kansas City blues roots, making him the ideal headliner.

Sitting in, and also in separate performance, were a cross-section of blues, gospel and jazz acts, most of whom were unknown to the mostly white, and very uptown audience. Sister Rosetta Tharpe and Mitchell’s Christian Singers covered the “spirituals” part of the bill, while Big Bill Broonzy, Sonny Terry and Bessie’s sister, Ruby Smith, filled out the blues side of things. Blues shouters Joe Turner, Jimmy Rushing and Helen Humes performed as well. Traditional, and by this time mostly forgotten, jazz styles were represented by the great Sidney Bechet, Tommy Ladnier and James P. Johnson. One of the big draws was the chance to see the three top boogie-woogie pianists, Pete Johnson, Meade “Lux” Lewis and Albert Ammons. Boogie-woogie was at the beginning of a two or three year national craze, and a chance to see its originators was a treat for many. Basie introduced his Kansas City Six band-within-a-band, featuring Lester Young and Buck Clayton, and performed a set with the full big band, too.

The concert was sponsored by the Marxist workers’ magazine, New Masses, and was popular enough to repeat the following year with a similar sort of lineup. Both concerts were recorded, so the audio is still available to hear, but one wonders what it might have been like if Robert Johnson had survived long enough to perform. Can you imagine live, concert recordings of that greatest of all blues singers?

In 1938 John Hammond crowned the first decade of his career by assembling a once-in-a-lifetime cast of black jazz, blues and gospel artists under one roof—Carnegie Hall. It was his historic Spirituals to Swing concert. Billed as the “Music Nobody Knows,” the concert offered performances by bluesman Big Bill Bronzy, who took the bus from his home in Arkansas to be on the concert; and harmonica player Sonny Terry, New Orleans soprano sax legend Sidney Bechet, a trio of boogie woogie piano masters, the Count Basie Orchestra and Sister Rosetta Tharpe singing “Holy Roller” gospel hymns and spirituals.

The idea was a history, starting with spirituals and leading up to big swing bands, involving African American performers. Hammond had difficulty gaining sponsorship for the event because it involved African American artists and an integrated audience. However, The New Masses, the journal of the American Communist Party, agreed to finance it.

According to the liner notes of the boxed set, “[i]n 1938… conceived a concert at Carnegie Hall in New York City to showcase African-American music from its raw beginnings to the most current jazz. Hammond… was one of the most influential talent scouts and record producers in history, having ‘discovered’ artists from Billie Holiday and Count Basie to [much later – Varlet] Bob Dylan and Bruce Springsteen. The concert, which would be titled ‘From Spirituals To Swing’, would depict the common themes that existed in Black music from its origins in Africa, through gospel and blues, dixieland and eventually to swing.”

“On December 23, 1938, ‘From Spirituals To Swing’ was presented to a sold-out house… Its success prompted another concert on Christmas Eve of 1939…”

“The musical significance of the two ‘From Spirituals To Swing’ concerts is difficult to deny. Equally important, however, were the social and political implications. The racial impact cannot be overlooked as African-American artists were being presented to an integrated audience at Carnegie Hall at a time when such an occurrence was, if not unheard of, extremely rare. The strong ties between the jazz world and the political Left were also obvious in the two sponsors of the programs: The Marxist ‘New Masses’ and the Theater Arts Committee which was an openly Left-wing organization. John Hammond was an independent iconoclast. In his efforts to foster social justice and integration he found himself at times in step with civil rights groups and Communists (though Hammond himself was never a member of the Communist Party). The impact of the integration of musicians and jazz audiences in the 1930s and 1940s was very influential on the racial history of our country. ‘From Spirituals To Swing’ was not only a musical milestone in the history of jazz, it was also a socially significant even coming at a time when our nation, as well as the world, was entering a period of inconceivable upheaval and change.”

The boogie-woogie craze of the late 1930s and early 1940s dates from these concerts. Johnson and Turner, along with Lewis and Ammons, continued as an act after the concerts with their appearances at the Cafe Society night club, as did many of the other performers. The stage moves and musical ecstasy of the gospel performers were new to the white audience, and presaged much that appeared later in rhythm and blues and rock and roll.

There is a paper available on the Internet titled “An Early Black-Music Concert From Spirituals to Swing” by James Dugan and John Hammond which makes fascinating reading.