In part 1 we look at two acoustic guitarists and two electric guitarists from the USA who paved the way for the later generations of British and American female guitarists. 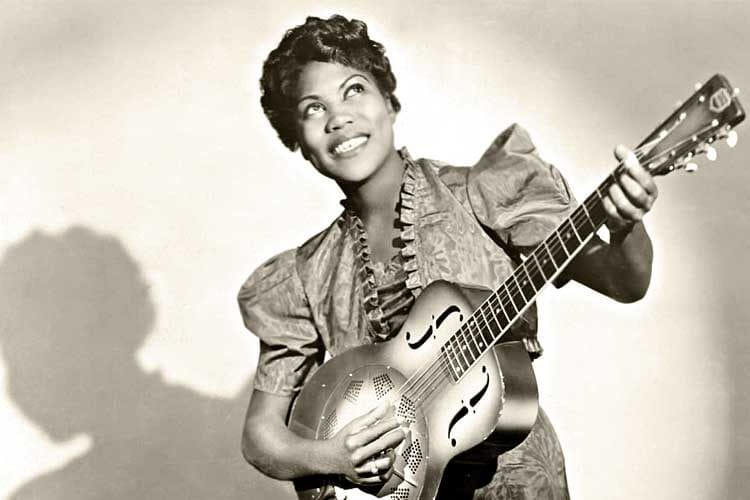 
Elizabeth Cotten  (1893 – 1987) was born in North Carolina and was a self taught acoustic guitarist. She bought her first guitar, as many musicians did, from a Sears and Roebuck catalogue and although it was a right handed guitar and she was naturally left handed, she learned to play the instrument upside down.

She played mainly rags, reels and dance tunes, many of them being her own compositions but having to make her way in life, she worked mainly as a domestic servant and so playing the guitar was put on the back burner.

Amazingly years later, whilst working in a store, she found a lost little girl and helped the child find her mother. The little girl was Peggy Seeger of the legendary musical Seeger family and so Elizabeth started working for the  family looking after the children.

Living in this musical environment tempted Elizabeth back into playing her guitar again for the first time in many years and before long Mike Seeger recorded her songs and released them as ‘Folksongs and Instrumentals with Guitar’ on Folkways Records.

She then started performing and recording for the time in her life in her 60s and was very soon part of the burgeoning American folk and blues scene of the early 60s and this led to her appearing with Muddy Waters, Mississippi John Hurt and John Lee Hooker at events like the Newport Folk Festival.

Many of her songs have been recorded by the likes of Bob Dylan, Joan Baez, Taj Mahal, Jerry Garcia and Peter Paul and Mary and with the money she made in her later life she was able to provide for her daughter and grandchildren.

She continued to record and tour well into her 80s and her release on Arhoolie Records in 1984 ‘Elizabeth Cotten Live’ won the Grammy award for Best Traditional recording.

Probably her most famous song was ‘Freight Train’ and it was considered by many to have been responsible for the rise in skiffle in the 50s in the UK. You can hear it here performed on YouTube  by Elizabeth when she was well into her 80s preceded by her also playing the banjo. https://youtu.be/Tm5-WdB_aVE

Memphis Minnie (1897 – 1973) was born as Lizzie Douglas in New Orleans the oldest of 13 children but as a youngster she spent her early days in Walls Mississippi learning to play the guitar by the time she was 11. She ran off to Memphis at 13 and started to play on the street corners before playing with a travelling circus for 4 years around the southern states.

Returning to Memphis, she hitched up with and married her second husband Kansas Joe McCoy (her first husband was Casey Bill Weldon, another notable Blues man) performing as a duo which resulted in a recording deal with Columbia Records. She also recorded for Vocalion and Decca and by the mid 30s, and divorced from McCoy, she was living in Chicago and part of the developing blues scene with the likes of Big Bill Broonzy.

In 1941 she started playing electric guitar and recorded her greatest recording ‘Me and My Chauffeur Blues’ and was performing regularly with Broonzy, Sunnyland Slim and Snooky Prior with her superb playing backed up by her deep voice.

After spells living in Detroit and Indianapolis she returned to Chicago in the 50s but with the demand for older traditional blues artists starting to decline, work started to dwindle though she did continue recording. As her health started to fail she moved back to Memphis with her 3rd husband in 1957 but in 1960 she suffered a stroke. Her husband died a year later and shortly after she had another stroke which resulted in her spending her last years in a nursing home before her death in 1973. She was buried in Walls and in 1996, Bonnie Raitt paid for her headstone.

She left a legacy of recordings and ‘Me and My Chauffeur Blues’ was recorded by Jefferson Airplane and her recording with Kansas Joe McCoy ‘ When the Levee Breaks’ achieved international fame when recorded by Led Zeppelin on their 4th album. She was also a major influence on the English blues guitarist, the late Jo Ann Kelly who along with her brother Dave of the Blues Band, raised funds to help Minnie in her last few years.
Here is her recording of ‘When the Levee Breaks’ on YouTube https://youtu.be/W5VmVvsjyKw

Sister Rosetta Tharpe (1915 – 1973) Born in Arkansas, Rosetta Tharpe was predominantly a gospel singer but with her rhythmic electric guitar playing and lyrics, she was regarded as the ‘Grandmother of Rock ‘n’ Roll’ and also had the moniker ‘Original Soul Sister’. Tharpe’s guitar style blended melody-driven urban blues with traditional folk arrangements and incorporated a pulsating swing that became the precursor of rock ‘n’ roll.

She was born into a Pentecostal evangelical family where singing gospel music especially by the women was encouraged. As a 6 year old she joined her mother in a singing evangelical touring group becoming an excellent guitarist, covering the southern states but by the mid 20s they had settled in Chicago. Married at 19 to a preacher named Thorpe, she modified her name to Sister Rosetta Tharpe before leaving her husband and moving to New York with her mother

Aged 23 she started her recording career with Decca and became an overnight sensation after her first four releases made her the first commercially successful gospel singer. This resulted in her appearing with Cab Calloway at Harlem’s Cotton Club and also an appearance at John Hammond’s ‘Spirituals to Swing’ concert at Carnegie Hall in 1938.

However, a woman guitar player performing gospel alongside raunchier blues singers did create problems with the the more evangelical members of the religious community and her popularity did suffer as a result. Nonetheless, her recordings including ‘Rock Me’ and ‘This Train’ did enough to influence a future generation of rock ‘n’ rollers like Little Richard, Johnny Cash, Chuck Berry, Elvis Presley and Jerry Lee Lewis and helped secure her name in musical history.

In 1957 she toured the UK in a tour organised by Chris Barber and then in May 1964 she appeared in a memorable concert at a wet and windy disused railway station at Chorlton in Manchester as part of the European ‘Blues and Gospel Caravan’ alongside Muddy Waters, Sunnyland Slim, Rev Gary Davis, Sonny Terry and Brownie McGhee amongst others. This legendary concert was recorded by Granada TV and the station platform was made up, rather parochially, to look like a rural American railway station with the early British blues fans seated across the track on the opposite platform. Watch part of this performance on the following YouTube clip and capture exactly what Sister Rosetta Tharpe brought to rock ‘n’ roll and blues. https://youtu.be/j8c3NQrKq1Y

Beverly ‘Guitar’ Watkins (1939 – 2019) Born in Atlanta, Beverly learnt to play both the guitar and bass guitar whilst at school and by the time she was 22, was playing with Piano Red (aka Dr Feelgood) and the Houserockers. The band toured nationally and achieved success with the release ‘Dr Feelgood’. Also in the band was Roy Lee Johnson who wrote Mr Moonlight which was recorded by The Beatles.

The band folded in 1965 and so Beverly then settled into performing around Atlanta with various local bands making her name as a superb blues guitarist known for her searing solos and she performed with B B King, Ray Charles and James Brown. However getting a record deal was difficult but in the 90s she was discovered by Tim Duffy, founder of The Music Maker Relief Foundation and he helped her re-launch her career booking her tours and shows across the USA and Europe.

Her debut cd ‘Back in Business’ was released in 2000 earned her a WC Handy nomination and the sleeve notes on the cd stated that she “sings and plays with enough poise and verve to make musicians half her age or younger consider alternative means of employment”.

She performed regularly through her 70s appearing at many of the big American festivals until she died of a heart attack in 2019. Watch her on the following YouTube clip recorded on her 80th birthday when she sets the bar for all aspiring female blues guitarists
https://youtu.be/VanzlLEWQYI

Check out Part 2 of the series here :