British Blues – Articles and Essays – Diary of a Bluesman – Chapter 3

Chapter 3 – The Road to Adelaide

I have been performing in one guise or another for more than 30 years. I cut my performing teeth in church. Not for me the evangelical gospel church immortalized in the Blues Brothers, but a more Catholic, folk influence. My music credentials were established when my class – mates and I recorded an album with the Spinners in 1969. I got my first national radio airplay at the age of 10.

I started to busk when I was still at school, and it is a form of performing that I still enjoy. When I was a student in Brighton it fed me on more than one occasion. I was asked recently to join a local group of musicians, called the Redbridge Music Lounge (RML), to come along and busk in Ilford Town Centre. The RML perform in all sorts of venues, I joined them recently to play at a gallery opening for example. They run singing sessions for patients recovering from serious illness as well as taking bookings for public events like the Olympics. As someone who hates all the commercial bull-shit that goes with the festive season, I rather liked the prospect of growling the blues at some unsuspecting Christmas shoppers, competing as I was, with the Sally Army further up the street, who were playing carols.

The first shift went ok, however problems emerged when I was approached by a police sergeant asking me, why I was playing in the street? The policewomen explained that they had received a complaint about the volume from a market trader. I politely explained that I was performing with permission, invited by the local chamber of commerce. Despite this I got chapter and verse about collecting money or selling CD’s, it was clear to me that I was being viewed as some kind of nuisance, little more than a beggar. What is it about London and busking? It is one of the few capital cities where street performance is not supported and encouraged. We have acquired the continental habit for café culture, but not it would seem – music in the streets. I know of at least one London bluesman who earns a chunk of his living busking, and the police are constantly harassing him. He has been threatened with arrest and or the confiscation of his equipment. It is as deeply frustrating to hear these stories, as it is to see the few regulated busking spots we have in London like the ones on the underground, empty much of the time.

I am busy getting ready to perform over in Australia where I am playing 13 shows at the Adelaide Fringe Festival in March, something I am very much looking forward to. I am busy promoting the shows. There are publishers and promoters to liaise with, posters and fliers to have printed.

Sameena, my soul mate and writing partner, has organized fliers and posters and the latest print run of Heaven Bound, this time in cardboard covers, less weight to carry over to Australia. CD Sales at the gigs will go some way to pay our day-to-day expenses while we are out there. Sameena will be performing her comedy show: ‘Tea With Terrorists’ while we are in Adelaide. 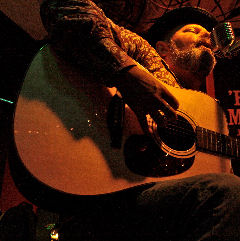 Heaven Bound performed at Round Midnight Jazz and Blues 28.12.11

The last month has been a good one gig wise, a couple with the band (Dr Blue and the Prescription) as well as some outings on my own.

This Tuesday it was a guest spot at the Hot Hob at the Essex arms in Brentwood, run by the talented guitarist John Edmonds. The Hot Hob is another great Jam, and like the Coach and Horses (Leyton), it attracts a loyal and appreciative audience. I arrived after a mad dash round the motorway, having forgotten my amp. John got on the phone and one of the regulars dutifully arrived with a replacement.

I performed a couple of songs from Heaven Bound solo, before joining the wonderful house band. I was pleased with the performance (see it on YouTube):

Claire Black (bass) and Andy Lomath (drums) are a talented, tight rhythm section, you could drive a train over their groove it’s that solid! John describes the Hot Hob thus:

Started from scratch in 2001 at the Hobgoblin Pub in Brentwood, this event started attracting musicians from far and wide. The quality of performances was such that the audience didn’t take long to follow and soon the place was packed out every Tuesday. When, after two successful years the pub decided to become a restaurant, a new venue was sought. The success of the jam continued with barely a hiccup and at this time the jam was named “The Hot Hob Jam” in remembrance of its Hobgoblin roots, plus the fact that it ‘Spat’, ‘Sizzled’, ‘Boiled’ and ‘Stewed’ – which it continues to do to this day!

There was a good mix of jammers who can also be viewed on YouTube. The house band and I ended off the night with a couple of rousing numbers sending everyone home happy, job done! With a late night cruise round the M25 in prospect and a 6 am start I was keen to be away. I headed off, dreaming of a brew and something to eat. It was already 1pm. Voice was a bit scratchy, I was feeling relaxed, in my post adrenalin lull. Filter left onto the M11. I had to remember to watch out for that bloody revenue cash-cow that sits at the start of the A406, the most profitable speed camera in Essex apparently. I of course got distracted, with no traffic on the road, cruising home and the Doors on the player, I forget to slow down. I wave goodbye to tonight’s fee (and some), raising two fingers to the yellow box.

I usually perform solo with a Taylor 312CE opened tuned to D for the slide numbers in my show, switching to a Boucher Wild Goose during the second half of the set. Sameena and I had been worrying that my Boucher guitar might not survive the many flight transfers, or even, go ‘walk about’! Cash is tight but I managed to shift an amp and a flight case and purchased a Washburn J600, which I will take to Australia. 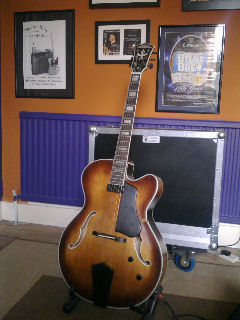 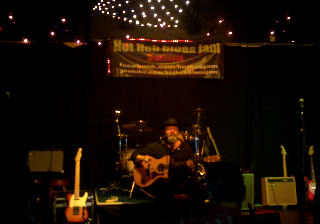 This evening the band will be playing a session at a bar called Off Broadway. We will use it as a chance to play together thus keeping us ‘gig sharp’. A band can very quickly loose its edge if it doesn’t play regularly. We have opened it up to friends on our mailing list, to come and sit in with us. The last time I spoke to Dave (‘Guitar’ Piggott) he said there was at least 6 other muso’s due to join us. Should be fun. Sadly Ray Wallen is out of action (we wish him well).