British Blues – Articles and Essays – Diary of a Bluesman – Chapter 20 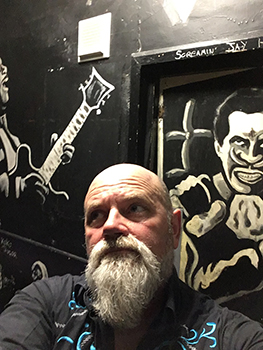 The Basement of Aint Nothing But The Blues Bar

It was home from the Shaftesbury Fringe to a few days of laundry, restringing guitars and clearing out the van. No time to draw breath, as it was off to Oxfordshire to perform at the Chinor Bike Dayz festival, a re- booking after a successful outing last year. Chinor is a friendly gathering of bikers who meet annually, to celebrate biking, share stories and raise funds for the local air ambulance, which for several at the event, has literally saved their lives. Oh boy these guys know how to party! It’s a very friendly affair with extended families, sometimes three generations of bikers meeting to hang out, listen to live music, and meet old friends.

This year I was to do the night owls slot at their Live Lounge stage. This is a late night slot starting at 12.30 (in the a.m.); finishing off a marathon Saturday of live music over two stages. I need not have worried that I would be playing to a few stragglers; many of the enthusiastic festival- goers, were still up drinking and setting the world to rights. I ended up performing for nearly two hours. That was one of those nights when I didn’t even bother to put up a tent- I crashed in the van!

I had a couple of days off at home in Brighton before heading back up the A1 for my second visit to the north this summer. This leg of the Summer Tour was to kick off at the curiously titled ‘Hard Tail Blues Club’. Described as a ‘Gem’ (David Bassford). It has a great stage, lighting rig and PA to die for. I got a bit of a shock when I went into the club to check out the stage. There was only low emergency lighting on, and I couldn’t locate the house lights. When I stepped onto the stage I was confronted by a tall, slightly menacing figure standing in the corner. When my gracious host turned on the lights, I was confronted by a manikin, dressed as one of the Fabulous Furry Freak Brothers, Phineas I think.

I really enjoyed the gig. Andy Jones (aka ‘Shakes’ of Audio Difference) the sound man, did a great job, and even found time to film it (link to a clip below): 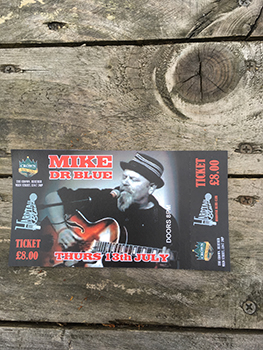 My next gig was at a venue I have played a couple of times now, the Half Moon in Darlington. I shared the stage with my dear friend Gary Grainger. I have written with great affection in past Diary entries, about this intimate local pub, with its enthusiastic and friendly locals. Gary recorded the set and you can hear some of that recording in the background to this diary entry.

I got a call from Fiona (agent), while I was out on the road, saying that I had picked up a Sunday afternoon gig in Harrogate at the Blues Bar. I was pleased because as it turned out they had also offered, to put me up in their sister establishment in Leeds on the Saturday night, in what they call the Band Room. This was a massive room upstairs from their huge city centre bar. It has three double beds and a single. Used to accommodate bands that pass through Leeds on tour and play at one of their establishments.

I had the room (more of a muso’s dorm!) to my self. I enjoyed a luxurious rest in a comfy bed, had a great shower and a chance to catch up with sleep and some writing. 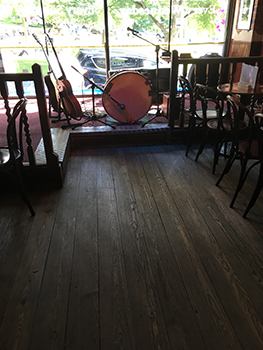 I turned up to a shiny pristine Harrogate, on a bright sunny afternoon. All the flowerbeds were in full bloom and the lawns were neatly clipped. The Blues Bar is just down the road from the Famous Betty’s Tea Rooms. I had embarrassed myself there on my last visit to Harrogate. I had gone into Famous Bettys and asked for one of their ‘Fat Bastards’. The apron wearing Edwardian looking gent who was serving me, didn’t crack a smile, but with a slightly arched eyebrow, he corrected me saying: ‘I think sir, you mean one of our Fat Rascals’. I thanked him, as he went to get a toasted fruit bun and a pot of tea!

The gig was less problematic; it was always going to be a struggle to get people in on what was a cracking sunny afternoon. We did get some folks who came in out of the sun. For me it was like playing in a greenhouse, as the stage is at the front of the bar, in front of a room –wide, plate glass window with what I suspect was a south facing aspect. It was bloody hot. The audience were lovely. I hope to play there again soon.

Home again, with a local gig in Brighton at the Lord Nelson, before heading north again on what is now an annual pilgrimage to the Edinburgh Fringe Festival, the largest open access arts festival in the world.

We (Sameena and I) were both taking a year off from performing a full run. I was up working for a week, which means bucket gigs in the Pear Tree Gardens, a guest spot or two on other peoples’ shows and some paying bar gigs.

As always it was good to catch up with our festival chums and the Carny folk, the itinerant performers who migrate around the world from Festival to Fringe.

I had to be back for a booking at the Worthing Blues Festival. 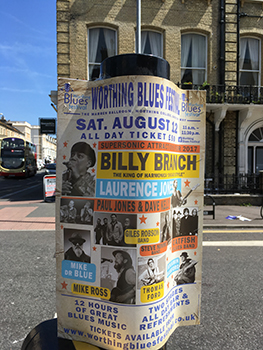 Worthing Blues Festival was fun. Promoted by Phil Duckett who also runs the Worthing Pier, which has a reputation for promoting the great and the good of the touring circuit. This was a new venture for him , on dry land!

I played a solo set on the acoustic stage. It was a typical festival crowd of Blues Fans, appreciative and warm. I also got to meet one the Blues Ciruit regulars: Paul Jones. I have been listening to his blues shows since he DJ the Jazz FM blues radio show on Saturday mornings back In the nineties. Paul always gave a shout out to bands playing gigs around town and we regularly got a mention on his show when Dr. Blue and the Prescription played at Aint Nothing But, in London. It was lovely to meet the man himself back stage in the Green Room, and shake his hand. I got to thank him for his support. I would like to have chatted some more but he was headed back to France to finish his holiday, which he had taken a break from, to appear in Worthing.

I can confirm that he is just as friendly and as lovely as he sounds on air. Paul is a great ambassador for Blues in general and for British Blues in particular, he is also a good performer. I look forward to meeting him again soon.

Next stop on the Summer Tour was a gig in the West Country. When I played a solo spot at the Bike Shed Day in Wapping at the Tobacco Dock, earlier in the year, I was approached by Roger Harrington the festival organizer for The Wilderness Gathering, and asked to play.

I was intrigued as it looked like a scout camp when I arrived. There were lots of outward-bound activities and wilderness skills on display. My favorite was a guy demonstrating how to make wooden canoes.

I was to headline an evening of live music played in a bar area created out of large tents and a large tarpaulin.

What a gig. Everyone was enjoying a lovely summer evening, the local cider and beer was flowing. At one point what looked like, three bearded survivalists plonked themselves down in the front row and started Tibetan Throat singing, which made me and the audience burst out laughing. They disappeared as soon as they arrived; I suspect they might have been consuming a particularly cloudy and infamous cider locally available ! It was all very good-natured. By the end everyone who could stand, was up dancing, which was a challenge on the uneven surface, in heavy boots and ‘well oiled with horizontal lubricant’ (Viv Stanshall).

The summer gigging rolled on, more venues more miles at the wheel, always a pleasure when the sun is shining and the road clear.

There was a gig at the Ranelagh (Brighton) with Roy on Keys and Saxaphone Jon. There was a run East to Kent to a new venue in Broadstairs, to play a Sunday afternoon. On this occasion I lost out to the pull of the beach and ice cream. Having said that there was a steady turnover of thirsty souls.

As the month progressed and the nights started to draw in there was a run up to London to play the Flamingo Club in Barnes and the last couple gigs of the run, all local to Sussex. 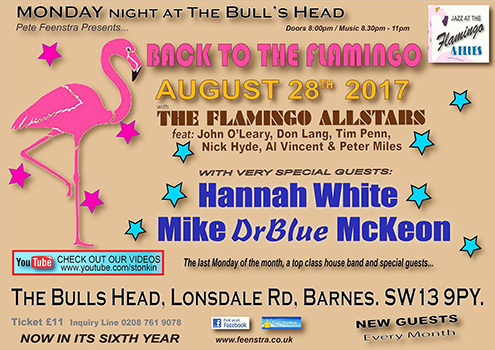 Roy and I played the fab Sunday afternoon gig at the Neptune in Hove. This very well and long established session has its own loyal audience who come out to listen to live music and sink a few excellent beers. It’s an intimate gig where a lot of the audience is close enough to chat with, in between the numbers. I love it. I’m due back again in December.

The final gig of the summer tour may also be one of the last live gigs at The Lamb in Lewes. Sadly, it’s another established music venue that is changing owners, and there is a cloud over the live music continuing.

Not to be down hearted, Roy and I decided to really go for it, go out with a bang! Roy was particularly pleased because there is a piano in the pub, which we turned round and incorporated into our stage set up. What a night. Shenanigans a plenty! Not sure how it ended up with Roy and I improvising a song for a group of excitable students but that’s how it finished. Two encores and a well-mannered if not rowdy demand for a third!

What a summer. Home for rest and writing. Plans now for next years touring include a European tour ahead of the Brighton Fringe, exciting new collaborations (more about that to follow), a new tour Poster and plenty more gigs. 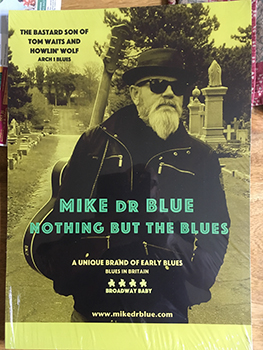