British Blues – Articles and Essays – Diary of a Bluesman – Chapter 2

Chapter 2 – Where I sing the blues?

Rick Stein recently appeared in a documentary on the BBC, exploring both the food and the music of the Mississippi Delta. Rick talked with great passion and respect about the blues. The show ended with Terry ‘Harmonica’ Bean saying: ‘Man I tell you, all musics got the blues in it, if you ain’t got no blues in it, man you ain’t got no music’.

It’s a gig night. Winter is here. So far this year, mainly cold clear nights. I hate going out when it’s raining, especially if I have to drive any distance. My pre-gig routine is the same. If it’s an evening performance, that’s an afternoon kip (snooze) for an hour and then something to eat. I don’t like to play having just eaten a heavy meal. Not eating isn’t an option. I once played a gig on the Holloway road on an empty stomach. I got half way through the set and my legs went. It is something similar to what marathon runners experience, when they ‘hit the wall’. It’s a weird experience having your legs go from underneath you. This particular gig had already been quite eventful as the house P.A. had burnt out during the sound check and I was singing through a guitar amp. I was revived by the plate of chips and a coke someone in the front row was eating- my guardian angel that night!

One of my favourite places to play or watch the blues is St Harmonicas. This rather unlikely blues club is located in an old Georgian House. Every Friday night, people gather after work to relax with their friends, drink a few glasses and listen to the blues. The club is run by a great muso, the brown leather pork pie hat wearing Dave Thomas (lead singer of the Vintage Blues Band). Dr Blue and the Prescription, the band I front with Sameena Zehra and my old friend Dave ‘Guitar’ Piggott, have played there a number of times. There is no fee; you take the contents of a pink cowgirl hat, which is passed round (less a donation for the sound man) – truly democratic. On most nights the contents of the hat exceeds the fee paid by many central London clubs!

I have just taken a call from Dave Piggott, asking me to step in and play the ‘guest set’ on Wednesday, at the Coach and Horses Blues Jam. Ray ‘Harmonica’ Wallen, a great local blues talent, (originally booked to play with Dave), cant make it. The Coach and Horses Jam bills itself as the friendliest in London, a fact I won’t dispute. The reason I think it is one of the best, is that it attracts not only a wide range of musicians, but also a loyal and appreciative audience. Terry, Stevie and Vera (who run the jam) ensure a warm welcome to everyone who turns out. If I am in town I go down to hang out with the regulars and catch up with the gossip, always on the look out for a new venue that might want either my solo set or the full band. Blues musicians are on the whole a generous lot, we all share contacts, phone numbers and the location of new venues.

Rehearsal time, off to Arch 1, Rob Clarke’s subterranean club in Canning Town. Rob’s place is one of the hidden gems on the London music scene. By night, a live music/performance venue, by day, a rehearsal space. The ‘Arch’, as it is known, is one of a series of underground spaces located at the side of Cranbury Lane, backing onto the railway line that runs up to West Ham Station. The curved brick ceiling gives it the look, the feel and the acoustics of a cave. The excellent sound proofing, provided by its construction, means that musicians can gather and perform late into the night. The Friday night jam is a typical example of this. Many local musicians will end up there after they have finished performing elsewhere. Unlike many venues in town, it isn’t plagued by complaints about the noise from local residents. It was the venue for the launch of my solo album, Heaven Bound. I arrived early and caught up over a brew outside. Rob is a musician’s musician and a great guy. If you ever get to hear him sing or blow the harp, you will know what I mean. It was Rob who described me as the ‘bastard son of Howlin Wolf and Tom Waites’. I was down at the Arch getting ready for the British Blues Archive (BBA) Legacy Festival, on the following Sunday. This project is one I am keen to support. Peter Harvie and Stevie King, who set it up, are keen for it to be more than just a repository of blues paraphernalia. This diary is part of the ambition for the BBA to document the current blues scene in the UK. The gig itself went well, a great line up, I hope there will be more.

Thursday 1st December, it’s a band night, i.e. I will be playing with Dr Blue and The Prescription at ‘Round Midnight Jazz and Blues’ in Islington. 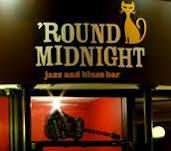 Set up and sound check by 8.30, first set 9pm. Round Midnight is a great venue, a short walk from Angel Tube on Liverpool road. It’s another club, like Ronnie Scotts, that was set up by a musician (s). Michael Berk, the owner, is himself a very talented muso, a veteran of the circuit. If you get a chance to hear Michael you will experience a virtuoso acoustic guitar picker, I always find myself taking mental notes. For me, being a musician means you get to learn all the time. Round Midnight also runs another of the better jam nights in London, hosted by the talented raconteur/singer Niall Kelly. Niall has an album out soon (http://www.myspace.com/niallk), check out his myspace site. The gig was storming, the band was really tight. We all sat around for a bit at the end, enjoying the post gig buzz, discussing the show and planning which venues we want to target for next year. Heading off, still on a high, we drove through the near- deserted streets of north London, enjoying the empty roads, radio on.

As I write I am getting ready for a gig promoted by the Green Fair Music Club at the Ilford Sports Centre. A fellow muso, Percy Aggett, lead singer of the Black Water Heavies is laid up sick. Steve Collins the promoter rang me yesterday to ask if I could cover. One of the advantages of working solo is that you can pick up last minute gigs. The logistics involved in contacting, never mind organizing for a band to play at short notice, make it difficult to cover these gigs. All of the guys in Dr Blue and the Prescription are involved in more than one project/band. Line-ups can vary from gig to gig. We have at least two drummers we can call on apart from our regular, Pete Abernethy. I love playing with Pete, a real pro, you could park a train on his groove, it’s that solid! Over the years we have had many bass players. Our latest, the talented Pete Feldon makes up our rhythm section, affectionately known as ‘Pete’! It is not just the rhythm section that can be substituted. If Sameena and I are performing elsewhere, Ray Wallen steps in and the band goes out as XRAY and the Prescription. Whichever version of the band you see, watch out for Dave’s crowd rousing party piece!

Coming soon in Chapter 3 of a ‘Year On The Road’, Police harassment and getting ready for the Australian tour.