British Blues – Articles and Essays – Diary of a Bluesman – Chapter 16 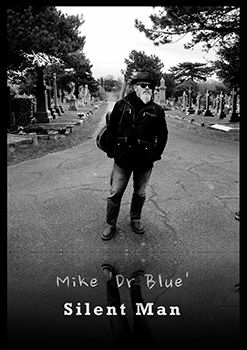 It would be overstating the obvious to say, it’s been a while since I wrote the last edition of The Diary of a Bluesman! – 18 months to be precise. I am currently at home in Brighton in rehearsals for the next round of the Poetry Army Tour, but more of that later.

Since I last wrote I have been busy. The high spot for me was performing at the iconic 100 Club on London’s Oxford Street, in December (2014) with my new band The Crossroad Kings. We shared support with Richard Townend and his band for the wonderful Marcus Malone. I allowed myself a moment to take a break from rehearsals, to sit in the dressing room on my own. I sat and thought of all the bands that had been there before, waiting to go on stage. We went on second after enjoying Rich and his great band. It was fab to be on that stage, looking out over the heads of my family and friends who had joined me on my pilgrimage to this bucket list gig. 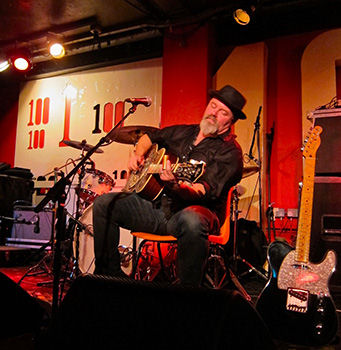 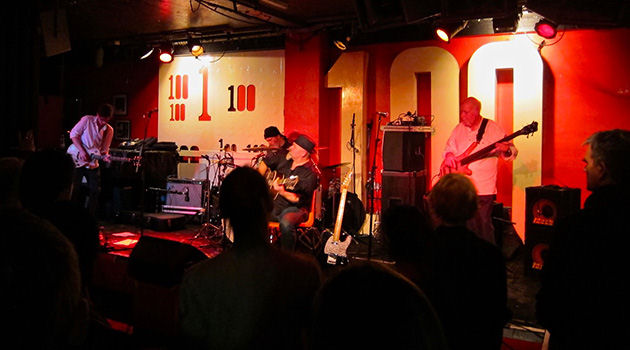 There were gigs in Australia last spring with a run of performances in variety shows at the Adelaide Fringe. I had performed a few guest spots as a warm up, in Perth . Staying in Perth and visiting Freemantle, you really do feel like you are standing on the edge of the world. With temperatures of 40 degrees C +, it was a bloody warm challenge.

At the Adelaide Fringe there were a couple of performing high’s, namely playing on the Bandstand in the Garden of Unearthly Delights and in the local German Club, where I performed to my friends in the Blues Dance Club. These young Blues fans danced and interpreted the music while I played and sang. Unlike many club audiences, this crowd loves a slow blues! More of a challenge to dance to than the up tempo numbers. We had first met when they turned up and took over a gig I had upstairs at the Austral Hotel, when I visited Adelaide to launch Heaven Bound in 2012. (Chapter 5 British Blues Archive Diary of a bluesman) It was great to meet them again. 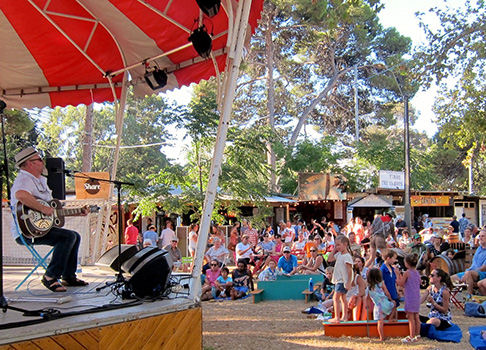 While I was in Adelaide I bumped into two muso buddies, Sammy and Kylie Horner, who make up The Sweet Sorrows . They are a Folk /Roots duo who were on the Australia leg of their recent world tour. They had been writing and performing material whilst out on the road, and asked me if I would play some slide guitar and harmonica on a track they had been working on. I spent a very pleasant afternoon in the Adelaide Hills at Kylie’s parent’s house, away from the heat and the bustle of the town, recording and enjoying some good old -fashioned Australian hospitality. Eating out in restaurants on tour is OK, but there is nothing quite like a home cooked roast.

A quick rewind to our Edinburgh flat in August 2014. I was warming up my fingers, playing some blues on my trusty resonator, sitting on the sofa, before heading out to play one of the 30+ blues gigs I do when I am up at the Fringe Festival (most years). My good friend and performing buddy Roy Hutchins, was up visiting for a few days catching a few shows and generally hanging out. He was sitting with me in the lounge while I practiced, when he suddenly started reciting some of the words from the Heathcott Williams piece he currently narrates. Roy then said: “ this could work”, he wanted me to play the music to ‘Poetry Can F*ck Off -PCFO.

On our return to Brighton we sat down and worked up 10 pieces of music for the 10 scenes that make up PCFO. By October I was sitting in a theatre in Halifax, performing the music for the show. I also had the singular pleasure of accompanying on guitar, one of my all time heroes of the poetry world, John Hegley, who was a guest on the show. As a poet it is a real joy to work and meet with some of the writers and activists who have inspired me to be a musician.

PCFO has now toured all over the country in the last 12 months, including a gig at the Glastonbury Festival. In addition there was as a visit across the North Sea, to play at the Fiery Tongues Festival in Holland. Fiery Tongues was a hoot to perform at. It is held in an old anarchists’ commune on the outskirts of Amsterdam. The festival combines poetry with reggae performances. Our main gig was in a decommissioned church. The audience, in varying states of enlightenment included someone doing yoga in the middle of the dance floor!

There is a short promo for PCFO, shot in our home – town Brighton, on the Brainfruit web site: 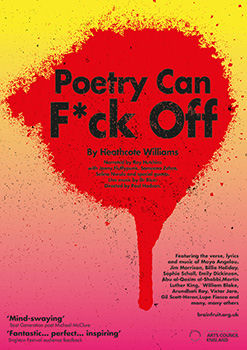 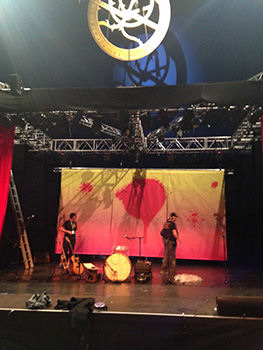 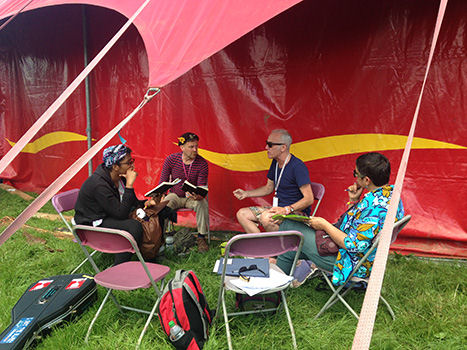 At the moment, Roy and I are rehearsing up some musical additions to the PCFO show as well as working on some shorter Heathcott-Williams pieces. This has been a lot of fun, and I am looking forward to finishing the last three gigs of the Arts Council supported tour, with gigs at the Crucible in Sheffield, Leicester and finishing at the Brighton Fringe Festival on the 5th June.

Last Edinburgh Fringe Festival (2015), included a ten day run at Summerhall, performing PCFO, where we picked up a lovely review from a very enthusiastic reviewer:

“Poetry makes nothing happen,” said W H Auden. What happened here: tears were streaming down my face, my feet would not stop tapping, and I was whispering along, wanting to be chanting. Spellbindingly performed with live music, this show opens with Auden’s provocative statement and proceeds to demolish it, by travelling through poetry’s intersection with politics. Ranging widely in time and space, from Tahrir Square to Fukushima to Mesopotamia, this is not canonical school stuff – it’s electrifying and erudite, passionate and political. This deserves to be sold out, packed out, standing room only. I’m going again, taking everyone who cares about anything. In my book, if you’re not going to ‘Poetry Can F*ck Off’, you can fuck off.

On return from Edinburgh Fringe 2015 I was spectacularly ill with flu. I was so unwell I had to stay at home and miss enjoying the amazing End of the Road Festival , where Sameena had been booked to perform. I had planned to chill out after more than 30 gigs performed over the run in Edinburgh. A lot of performers complain that they get sick after ‘Edinburgh’. Its not surprising, the days are long. I will sometimes play three gigs a day and there are a lot of late night spots. By the 4th week of Fringe I was ‘running on empty’ (Jackson Brown), sustained by caffeine and alcohol, not a good combination.

My newest album ‘Silent Man’ was finally mixed just before Christmas 2015. Paul Booth (my co- producer) has done a great job with the band tracks, which we recorded originally on tape but then mastered to digital. These tracks will be combined with four acoustic tracks that I have also recorded with another muso buddy of mine, Chris Whyatt at his studio in Essex. We are planning an album release in May/June 2016.

At this time a film version of the single ‘Silent Man’ has topped a thousand views on YOUTUBE and Vimeo. The single has already had some air -play in Australia, and I am looking forward to perhaps touring the album there next spring (2017).

You can watch Silent Man on my web site: www.mikedrblue.com

Conscious that my ‘portfolio career’ as a jobbing muso was getting busy I have now secured the services of an agent. She has found me dates in Brighton at the Ranelagh and the Neptune, two great blues pubs. I am looking forward to a couple of blues festival gigs later in the year, as well as a night in the Blues Kitchen in Camden in April, all organized by her.

I am particularly looking forward to returning to the venue where I started my solo career, when I launched Heaven Bound back in 2012, the Arch 1 Club in Canning Town. This great venue is owned and run by a dear dear friend and blues muso- Rob Clarke. He was the one who called me (the) ‘bastard son of Howlin’ Wolf and Tom Waites’. We are planning to show the video before I play a set from Silent Man. See web site for details!

In the last 18 months I have toured in Australia, gigged all over the UK and in Holland. I have become a musical director as well as learning how a music video is put together. I have completed the recording of a band album and I am now promoting the single as we speak. I love this life. I feel blessed; I am looking forward to what comes next. 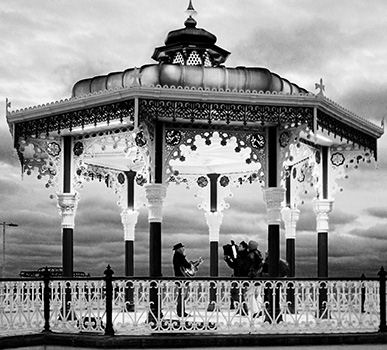