British Blues – Articles and Essays – Diary of a Bluesman – Chapter 14

Chapter 14 – The March of The Poetry Army

‘I think the blues will always be around. People need it’ 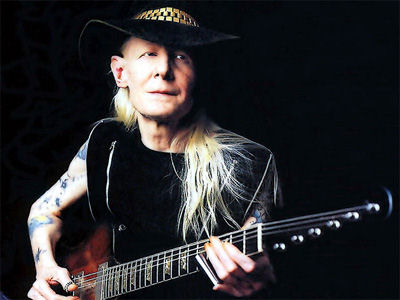 The March of the Poetry Army

I have been busy performing again recently after a bit of a break. In the last month there have been trips to play at jams in London, Worthing and Brighton. I was beginning to get a little rusty, having not performed or played blues in public for some time. I needed to get myself ‘sharp’, performance- wise, for a gig . I was booked to play a couple of sets at the Ranelagh in Brighton on Sunday 13th July. I was billing it as the ‘No balls only blues’ night!’. I had to do something to try to rustle up an audience, once I realized that the gig was competing with the world cup final. As it turned out, the Ranelagh was one of only a few pubs in Brighton (possibly the world), not showing the football that night. I ended up with a modest audience of other world cup refusnics! We were all delighted with the result (on the pitch) as Mikel (the owner) is German. 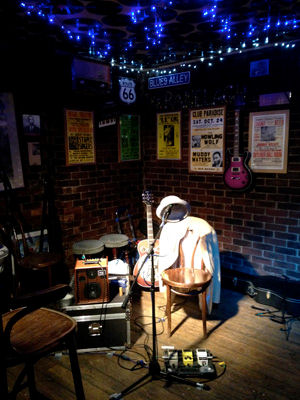 Set up at the Ranelagh

Most of my performing recently has either been for the comedy promoter Nik Coppin or the Poetry Army. I have written about Nik’s variety franchise ‘Huggers’ before in earlier blogs. I love doing Huggers, they are fun shows which often degenerate into youthful madness and a stage invasion. I played a run of gigs during the Brighton Festival for Nik this May.

I am as I write, sitting in the car park of Silverstone Race Track just outside Milton Keynes, waiting for my colleagues who are yet to arrive. We have been booked to entertain the children of the petrol heads who are here enjoying a weekend of Formula 1 Motor Sport. Being here was a bit weird at first. It feels like I have stumbled into a secret gathering of bird watchers and train spotters. Many of the crowd here, are wandering around carrying expensive optical equipment, presumably to catch a fleeting site of the object of their desires, as they fly by at speed. Unlike trains and our feathered friends, the cars here at least pass by every couple of minutes. Those in the know have paid for Pit Passes so they can admire the colourful cars at rest.

It is the second time this week I have been performing in what is basically a tent in a field. The gig on Sunday at the Ranelagh will at least have a solid floor!

The folks here at Silverstone are generally much older, cleaner and less stoned, than the crowd at Glastonbury, where I was performing over the weekend of the 25th May. The toilet facilities are more permanent and a lot less muddy. I find the hygienic and ‘Country – Fayre’ type vibe, rather disconcerting. Some of the services advertising here, especially the country sports and shooting parties, just make me smile. I suspect quite a lot of this crowd would like to go wild at Glasto with a firearm. I half expected some Burberry wearing member of UKiP or the Conservative Party to jump out from behind a 4X4 and thrust a leaflet in my unsuspecting paws. 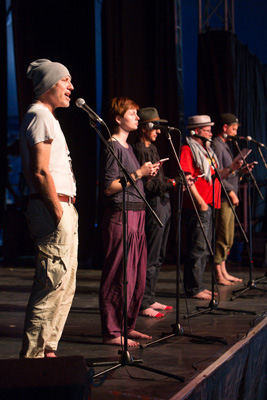 In the last two months I have also performed in a spoken word piece called the Poetry Army for a friend of mine Roy Hutchins. The piece written by Heathcote Williams, is a wonderful spoken word performance that is narrated by Roy. The ‘army’ changes with each performance. The performers or ‘soldiers’ recite the quotes. In Oxford recently I performed with a wonderful regiment which included Sameena (my wife , partner and musical collaborator) an actor buddy Steve North, and my all time comedy hero Jeremy Hardy. The show at the Play House was particularly special because Heathcote was in the audience. It was a treat to meet and spend time with one of my poetry / activist heroes. I first became aware of Heathcote’s work up in Edinburgh a few years ago when I spent time fliering a show made up of readings of poetry, written by Heathcote and read/performed by Roy called: Zanzibar Cats. The icing on the cake for me in Glastonbury was performing alongside my darling daughter Caitlin, who in addition to reading in the show, manages the Poetry Armies on-line presence. Details of the Poetry Army can be found at:

There is a short promo on Youtube of the Poetry Army: 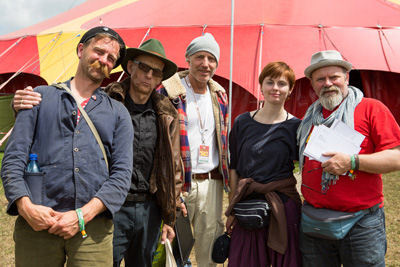 I recently became involved in a Facebook stream which was heading to be long enough to class as a blog in its own right. The theme was ‘Blues Names’. There is a long tradition in the blues world for performers and fans alike to have an alias’ , for example: Big Bill Broonzy , Muddy Waters, Blind Lemon Jefferson, Ma Rainey and Howlin’ Wolf. A local bluesman and muso buddy Steve Lambsden was caught up in one of those daft streams that develop very quickly, and it ends up being difficult to work out how they started, are less than serious and develop a life of their own. The premise was :what should Steve’s blues name be? This was my contribution:

First some general advice- do you have any pre- existing medical conditions- ‘Stumbling Steve’ for example? Do you have any particular playing or singing styles (‘slow hand’, ‘toots’ or ‘riff’ ). Do you come from, or live anywhere that has a catchy name- I would avoid ‘Steve ‘Bognor’ or ‘Dorking’ ? Lambsden . In the spirit of the blues you could choose something quite literal like ‘Steve the pick Lambsden’ . There is also quite a long tradition of medical prefixes for example: Blind Lemon. For further suggestions can I suggest R. Crumb’s Heroes of Blues Jazz and Country? Good luck. Some of my favs from Crumbs: Furry Lewes, Jaybird Coleman, Curley Weaver, Sleepy John Estes, Barbecue Bob and Papa Johnson. Any religious references have the advantage of potentially attracting the Evangelical audience- Preacher Steve, The Reverend ‘soul saver; Lambsden or Saved Steve Lambsden. Good luck 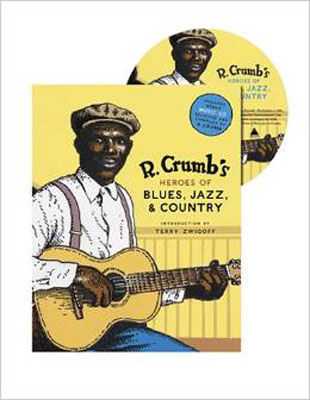 R. Crumbs colourful contribution to the world of Blues, Jazz and Country music. I hope Steve Lambsden will find inspiration for a stage name! Steve is the lead singer and guitarist for the band – Blues Issue. They are regulars on the south coast blues scene. You can find them on FACEBOOK and on YOUTUBE : https://www.youtube.com/channel/UCoykz-cOM0CI1EuuwRlqVeQ A great blues outfit. I am hoping to interview Steve for an edition of the diary when I get back from Scotland in September.

I don’t think any of my suggestions or indeed many of the others were considered, or even taken seriously- sadly!

I am heading off to the Edinburgh Festival for the month of August where I have 8 sessions booked to play. I have a gig on the way back in Darlington at the Half Moon (I played there last October) with my blues buddy Gary Grainger. We will be recording a session for Gary’s blues radio show on Bishop F.M. On my return it will be back to getting my new album recorded. It is nearly complete. It has taken an age to finish but I am excited to start preparing for some gigs with the Crossroad Kings. 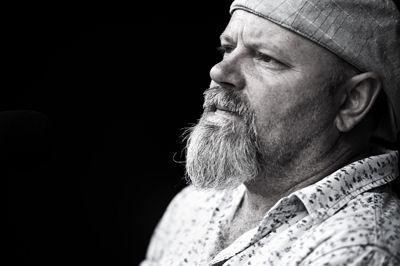