British Blues – Articles and Essays – Diary of a Bluesman – Chapter 1

Chapter 1 – A Bluesman’s Year on the Road 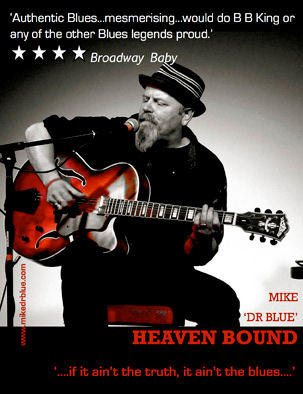 Dusk, Donington Services my destination. The air is filled with the smell of wood smoke and cordite it’s November 5th 2011. The night we celebrate the last time a group of honest men entered the Houses of Parliament! I must open my set with that one! The street lights flicker on ahead of me as I motor up the M4. My usual traveling companion Sameena is at home feeling poorly, so it’s the stereo for company. Eric Bibb if I need to soothe my soul, the Bass Balls if I am running late (try driving slowly to those guys!), or the Doors for atmosphere.

It’s a mild clear night out. Inside the car its raining- Riders in the storm – Jim Morrison sings in the background. Peter Harvie, from the British Blues Archive has asked me to write a diary of my experience of the Blues over the coming year. He wants me to chronicle my travels and gigs as I go out promoting my now, not so new solo album, Heaven Bound. Give a view from the inside of Blues in Britain. 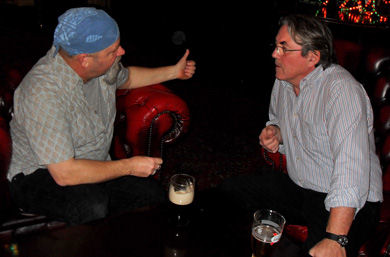 I was delighted to be asked, and I am musing on the task as I finish the last of the food I brought to keep me going. The gig tonight is supporting the Reverend Peyton’s Big Damn Band. A quick look on line shows a three- piece line up. In addition to The ‘Reverend’ on slide guitar, vocals and harmonica there is Breezy Peyton his partner on wash board/ vocals and Cuz (cousin) on drums. I arrived as they were sound checking and sat down to wait my turn. Sitting around is a big part of a gig night. I met up with the guys in the Green Room, in this theatre at the side of stage right. 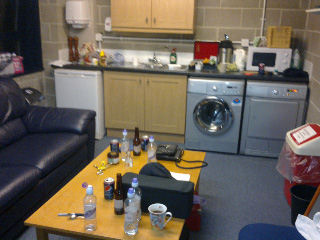 When I enter the band’s driver was asleep stretched out on the sofa, Breezy was doing the laundry in the machine conveniently placed next to the sink. I wandered off for a smoke and came back to find the band checking their iphones, catching up with friends and fans. These guys have been on the road for the last couple of months. They tell me they are constantly touring, something like 10 months of the year. The Reverend is an interesting if not slightly startling looking guy, over 6 feet with a long, thick black beard. He starts to show me how to tie a knot with one hand, useful if you are in a river and someone needs to throw you a line to haul you out. The neatly wound length of brown twine he keeps in his pocket isn’t long enough, so he sends the artistic director of the theatre to get him some rope, oblivious of the fact that I have just had my 5 minute call, the audience are already in the auditorium! 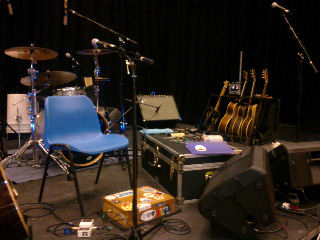 Mike Dr Blue’s stage set up with stomp box. (The Revs guitar collection can be seen in the background, Cuzz, the drummers white plastic bucket ‘floor tom’ to the left of the blue chair) 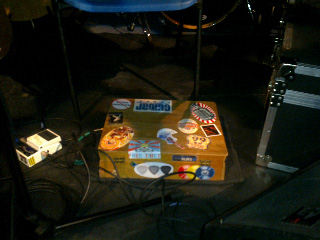 I am pleased with the response from the crowd and sell a load of CD’s. I love to chat to the audience at the end of the set when (hopefully) we are all a little pumped after the performance. Whilst the audience files out to refill glasses and to watch the fireworks, the soundman and I clear all my stuff off the stage, leaving it ready for the main act. The Reverend Peyton’s Big Damn band deliver their style of slide guitar country blues with great energy and flair. The whole performance is like a mad hoe down on speed. The Rev. has a unique set up whereby his guitar goes through a Fender Bass Man before being sent to a more traditional guitar amp. This technological fix alongside his great talent for playing a bass line on the guitar at the same time as sliding or picking the top strings gives the appearance of there being two guitarists on stage.

Breezy strikes an imposing figure on stage also with her red cowboy boots and a washboard strapped to her chest, which she plays with a pair of modified gloves. Stand close at the front of stage at the end of the show at your peril. Breezy sets fire to the washboard as part of her finale. The Rev has already played some blistering guitar behind his head. Lets not forget ‘Cuz’ on drums. Seen last by me in the Green Room, with his head over a steaming bowl of hot water and Vicks. He, like the rest of the band (and the crew) has picked up colds. As they are all traveling in the same van, it has spread quickly! Cuz is playing a modified kit, which includes a bucket mounted on stands and replaces the floor tom – great sound! 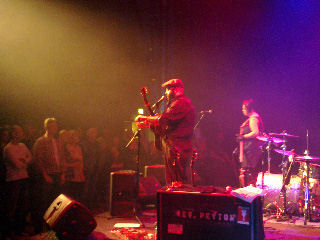 The Rev on stage

We all meet up in the foyer after the show to mix with the audience who are all excited and animated by the performance. I spend time chatting (sell and sign a few more cds), before heading back into the auditorium to pack up and head for home. I found the Rev, working on his guitar, which is in need of some fettling. I pull out some super glue from my kit box and we manage to secure a loose screw with some wood shaving expertly whittled from a piece of scrap wood we rustled up from somewhere. 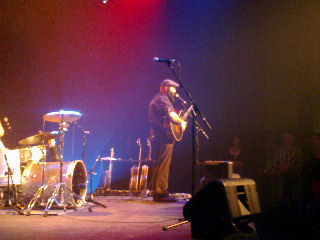 It is now gone midnight and I have a two-hour drive back to London. This is the part of the evening that is less fun, tired as I am; the journey is always easier heading back-no traffic. My next gig is with the band on the following Friday. It is at one of my favorite Blues Venues, St Harmonicas- More Soon.